I finally set foot in the top destination of my dreams. Why Bhutan? From everything that I had read and heard, Bhutan is no ordinary destination. It sounded phenomenal and magical!

I knew I was flying into a magical place the moment our plane cruised past the summit of Mt. Everest. Landing in Paro looked so breathtaking with the view of the spectacular valley below and the majestic mountains that surround it, making it the World’s most difficult airport for landing and take off.  Apparently, only a handful of pilots are qualified to fly into Bhutan. Thanks to their exceptional skills, our flight landed safely and smoothly. Paro airport is the most beautiful and unique airport I have been to.

The landing in Bhutan was just a teaser to the beauty that unfolded in our 6 wonderful days in blissful Bhutan:

Thimpu, the capital of Bhutan.

We were met at the airport by our guide and we were whisked to Thimphu.  The two-hour drive from Paro airport to Thimpu was very picturesque and tranquil. We drove through scenic mountains and valleys dotted with quaint villages, rice paddies and orchards. It is a small, charming capital city, probably the smallest capital in the World. Thimphu offers a unique skyline as all buildings are constructed in traditional Bhutanese style. 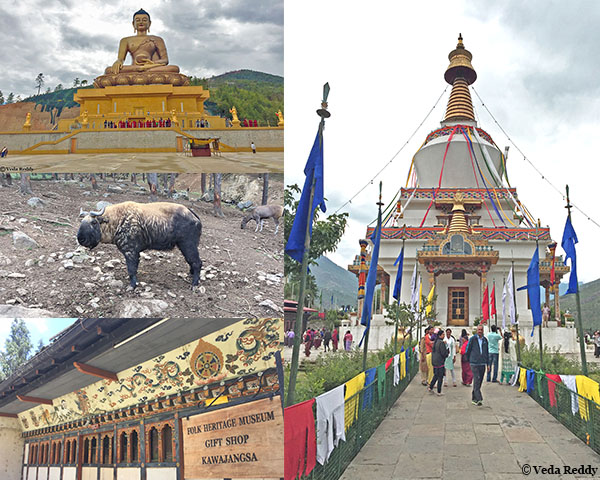 After a beautiful couple of days in Thimphu, we drove to  Punakha via Dochula, located at an elevation of 1,200 meters above sea level and by the two main rivers of Bhutan, the Pho Chu and Mo Chu.

Dochu La is a  mountain pass which offers a stunning 360-degree panoramic view of Eastern Himalayan mountain ranges. The view is especially scenic on clear, winter days with snowcapped mountains forming a majestic backdrop to the tranquility of the 108 Chortens gracing the mountain pass. 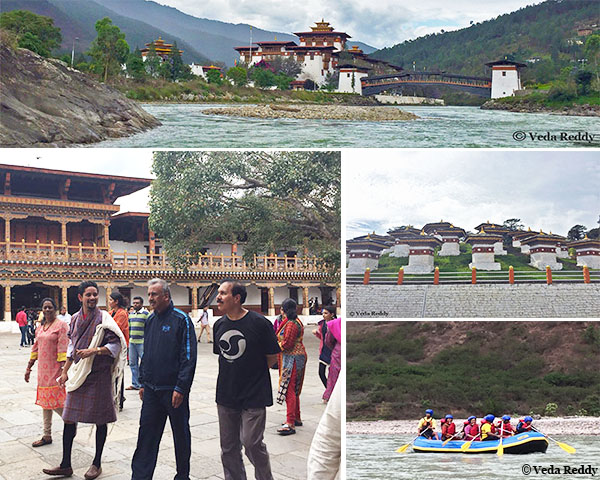 The Paro valley extends from the confluence of the Paro Chhu and the Wang Chhu rivers at Chuzom upto Mt. Jomolhari at the Tibetan border to the North. This picturesque region is one of the widest valleys in the kingdom and is covered in fertile rice fields and has a beautiful, crystalline river meandering down the valley.

Hike to the Tiger’s Nest Monastery.

We concluded the trip with the highlight of all highlights – the hike to the legendary Takshang Lakhang, also known as Tiger’s Nest Monastery, perched on a sheer cliff 10,000 feet/3,048 meter above sea level, the most stunning and fascinating location. Tiger’s Nest Monastery is believed to be the birthplace of Buddhism in Bhutan, making it the most sacred monastery in the country.

Why is it called the Tiger’s Nest?  Legend has it that in the 8th century Padmasambhava, one of the holiest figure in Buddhism, flew to this spot from Tibet on a back of a tigress to conquer a demon and then resided in a cave where he meditated for 3 years, 3 months and 3 days. The monastery was built around the cave where Guru meditated. Today, a trip to Bhutan is not complete without a visit to this mystical site.

We started our hike at 7.am. The monastery looked like a tiny white speck from the starting point.  It took us around 3 hours to reach the monastery, including a quick breakfast stop and many photo stops. The cafeteria is the halfway point and the first viewpoint. From here the view of the monastery and the cliff was even more dramatic. We learned that many people ended their hike at this point. I had read that the second part of the hike was easier than the first half.  And finally the trail flattened!  It was true that the second part got easier (for a bit) and we enjoyed walking horizontally. Finally, we reached the second viewpoint. The vista of the monastery and  Paro Valley from here was beyond spectacular. It was absolutely worth the climb. The last bit of the hike, for me, was the toughest! The trail turned into steep descending steps before it climb up again, over 700 steep steps in all.

It was exhilarating to finally reach Tiger’s Nest Monastery. Photography is not allowed inside, we had to deposit our backpacks, cameras and phones at the entrance.  There were several temples and statues of other Buddhist deities within the monastery. Having hiked to the Tiger’s Nest, we were filled with the sense that our journey was complete. We descended with a feeling of lightness. And yes, the hike downward was much easier and took us approximately 2 hours. 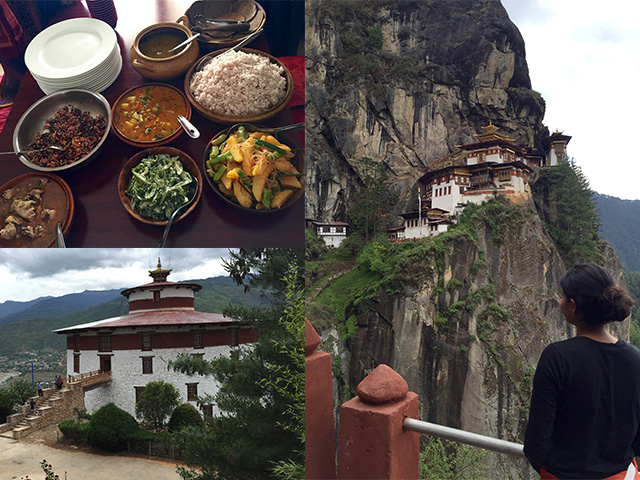 We tried some authentic Bhutanese food. A typical Bhutanese meal is made up of mainly red rice, chilli paste, Ema datshi – chilli cooked in cheese, stews of meat (beef, pork or chicken) and vegetables. In my short stay in Bhutan, I got a chance of visiting a Bhutanese family and friends. They made sure we try the local Ara (a home brewed rice wine), Suchar (Butter tea) and Ema-desi (Chilli cheese). It was definitely a joy to be on the receiving end of Bhutanese hospitality.

Nestled between Tibet and India, Bhutan is indeed a small gem worthy of discovery. I was awed by its pristine nature and dramatic landscape; its ancient temples, monasteries and fortresses; and the richness of its Buddhist heritage. The Bhutanese adore their King and Queen and refer to them as the People’s King and Queen. Their faces followed us at every hotel, restaurant, temple and shop we visited. Buddhism is so infused into everything that,  you can’t help but gain some knowledge.

To discover Bhutan with us contact our travel experts at travel@planetwildlife.com for a tailor-made itinerary.