The Republic of Indonesia is located in Southeast Asia and is an archipelago comprising over 17,000 islands. It shares its borders with many countries including Papua New Guinea, East Timor, and Malaysia. The country has a tropical type of climate and varied geography. It has the world’s second highest level of biodiversity. Approximately 60% of the country is covered with forest. This, along with its many beautiful temples, bustling cities, colorful markets, humbling volcanoes, and scenic water bodies makes Indonesia a truly exotic getaway that is as diverse as its people.

Wildlife and nature enthusiasts will find themselves quite at home in the remote forests of Indonesia. Trek through the wilderness of Sumatra and be rewarded with a once-in-a-lifetime experience of seeing endangered wild orangutans. Go diving at one of the many world-class diving sites to explore coral reefs. Travel to remote villages and enjoy the hospitality of the local tribes. Take a canal tour across the waterways of Banjarmasin, often known as the “Venice of the East”. For an unforgettable holiday in Indonesia, stay at a traditional tribal longhouse or experience personalized cruising along some of the most secluded parts of Kalimantan.

Indonesian culture has many different influences, the most prominent one being the Hindu culture of the former Majapahit Empire. The most popular Indonesian art is wayang kulit shadow puppetry, where beautifully detailed cutouts are used to depict scenes from the Mahabharata, Ramayana and other popular mythology. The locals are friendly and willing to help tourists. However, considering that hundreds of different languages are spoken with in the country, communication might sometimes be an issue. 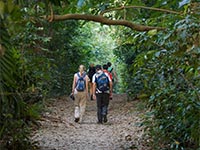