The Republic of Costa Rica is a Central American country located between Nicaragua and Panama, bordered by the Caribbean Sea and the North Pacific Ocean. Costa Rica’s terrain comprises coastal plains interspersed with rugged mountains and volcanoes. It houses some of the major volcanoes of the world and many tourists come here to view them in all their spectacular glory.

Costa Rica is one of the most bio-diverse places on the planet. It is believed that parts of the country host almost 6% of the world’s flora and fauna. Almost 25% of the country is protected through national parks and reserves. Corcovado National Park is famous for its big cats and tapirs. Tortuguero National Park, on the other hand, is known for the annual nesting of the endangered green turtles here. Tourists also venture to Montverde Cloud Forest Reserve in search of quetzals, Baird’s tapirs, ocelots and jaguars. Arenal Volcano National Parkcontains a great wealth of geologic and biological complexity, as evidenced by the active and incredible Arenal Volcano.

The capital city of San José hosts high-rises, slums, and everything in between. There are many museums to be explored, exquisite cuisines to be devoured, and exciting nightlife to be experienced here. The people of Costa Rica are usually of an easy disposition and willing to help out tourists when in need. Travellers are, however, advised to exercise caution, as there is an increasing crime rate within San José. 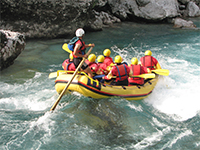