Guest author Neal Cooper is an expert photographer and safari guide. He shares his story of a recent encounter with hippos at Chobe National Park in Botswana.

I have just returned from the first of our 2014 CNP Photographic Safaris to the Chobe River and would like to share a special sighting with you. One afternoon I decided to go out a bit earlier and visit an area further upstream from Kasane in the hope of finding some of the local predators or some good bird sightings. It was to be a trip not to be forgotten quickly. When we reached the area in question, a client who is a very good birder, immediately spotted a very special bird in one of the dead trees. A western banded snake eagle, which is a very special sighting for any Southern African birder. It flew up from the already decent perch and settled on top of another tree against a blue sky as background. We were very pleased with this sighting and after photographing a more birds like the fish eagles, night herons, and kingfishers we headed back down river towards Kasane.

On the way back we spotted a hippopotamus standing motionless on the riverbank with her head resting on something which looked like a rock. As we approached we spotted something lying on the ground in front of her. It turned out to be a very young dead hippo, probably her baby. I couldn’t see any wounds on the side which was showing, so we pulled up the boat, kept a safe distance, and watched as another very large hippo approached from the water. 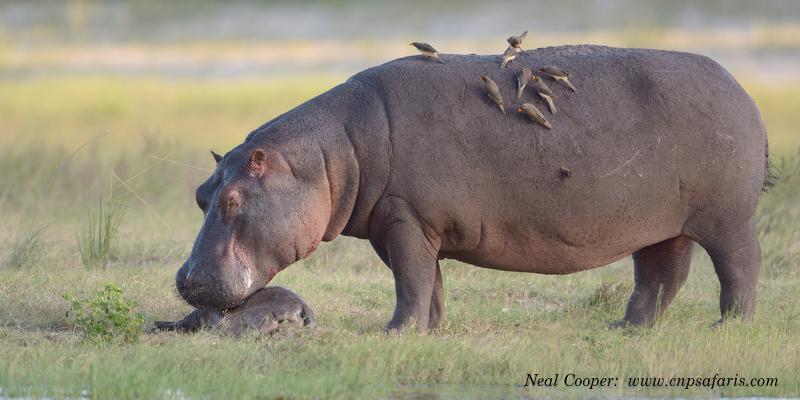 The mother hippo was showing all possible signs of aggression towards the intruder by spraying her feces, showing her teeth and saliva dripping from her mouth. The other hippo, although a very large individual, dared not exit the river and face the mother so he stayed in the water and eventually moved away to a safer distance.

The hippo is deemed the most dangerous animal in Africa and a mother with a dead calf would certainly top the hippo danger list. A hippo will have one healthy baby after an eight months gestation period and will keep her newborn away from the main pod for a few months as a youngster can get trapped in territorial battles or even get squashed between other hippos while lying in the water or mud. 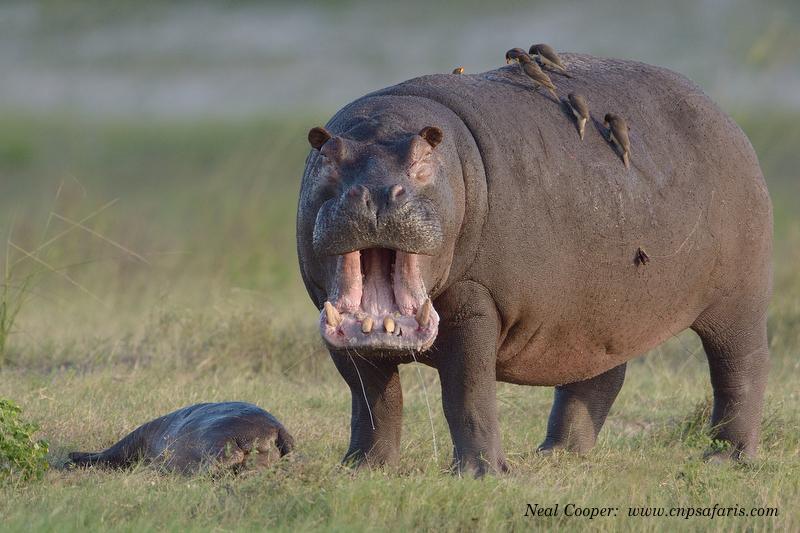 The mother hippo signaling that others should stay away

We speculated that the youngster was either killed when it got in the way of a fight between adults when the mother felt threatened, or killed by a male hippo to rule out future competition. The latter not being a very common occurrence.

We stayed with the grieving and obviously distressed mother as long as we could before we had to be out of the park. We left her standing over her dead calf.

The next morning we decided to go back to the area to see if the carcass had attracted any predators during the night, but when we arrived we saw two other hippos standing over the body. A very large female was mouthing the carcass and when it was turned over we could see a bite mark on the side of the baby with the entrails showing.

She was still displaying faeces spraying and yawning aggressive behaviour towards the other hippos when she charged towards an individual and a fight ensued. The next moment a second hippo attacked her from behind and she fled towards the main pod where a third hippo joined in. 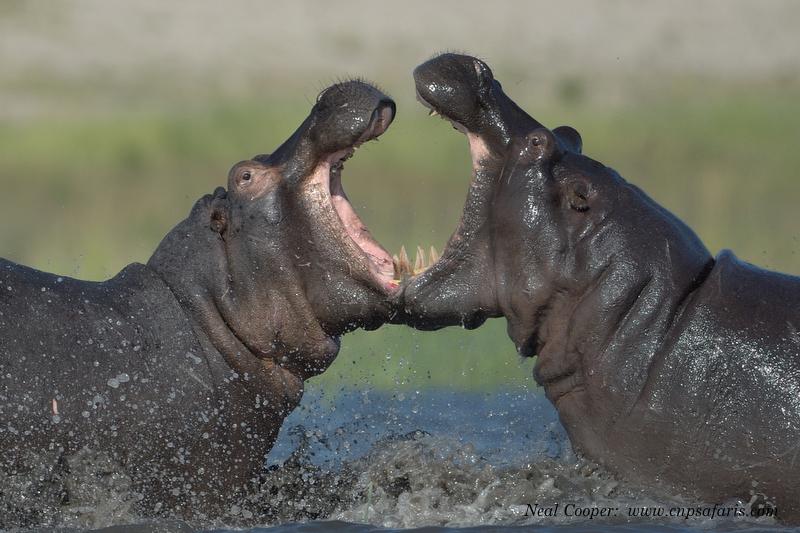 The mother and another aggressor engage in a fight

They chased her around until she found a spot in deeper water, and everything calmed down after that. I would have loved to know what happened to the calf and why the pod had turned on the mother; however, it was time for us to leave the park. 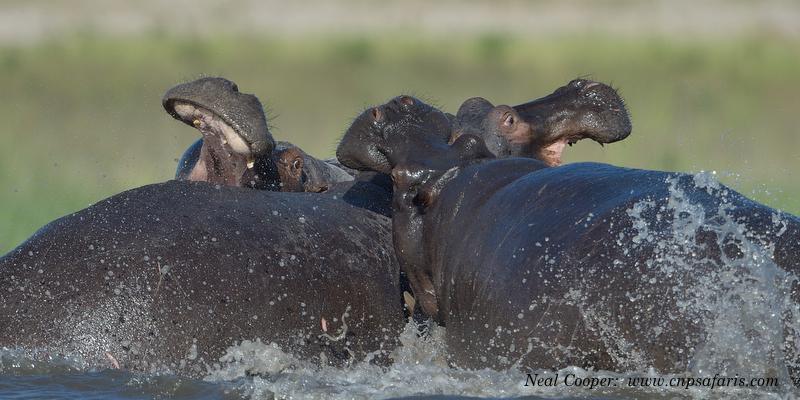 Two other hippos join in the fight against the mother hippo

You can experience these emotional and exciting moments yourself on a specially designed photography safari with Neal as your guide. The tour departs on 27th June 2014. See the details here (Contact us for other departures).

Note: This post has been reproduced with express permission.