It all started with an idea of a getaway from the daily hustle bustle of city life and mundane routine. With an impending travel plan in mind, I decided to travel to Ladakh - 9 days trip that took me to Leh, Khardungla Pass, Nubra Valley, Pangong Lake and Tso Moriri Lake.

Four groggy heads made way to the airport to catch a 6 AM. flight from Delhi to Leh. As I stepped off the aircraft in Leh, the first thing that struck me was the fresh air reaching my lungs. At the airport, we were bombarded with announcements bearing the information of the altitude and things you need to take care of, while in Ladakh. First information is that you are at 11500 ft above sea level and you would face breathing difficulties, headaches, nausea (which is pretty common), so complete rest is advised on the first day.

After complete rest, the next day we headed to Sangam, which is a point of interaction of two rivers – Zanskar and Indus. It is astonishing to see that both the rivers have totally different water colours. Zanskar is muddy and Indus is sparkling blue in colour.  One can also do river rafting on the Zanskar river if time permits.

We then headed to Alchi monastery which is almost 70 Kms from Leh city. On the way, we did stop at the Magnetic Hill point, where our driver showcased the enigmatic experience of the vehicle being driven on its own without any acceleration. We were completely awestruck with the picturesque drive along the Indus waters. 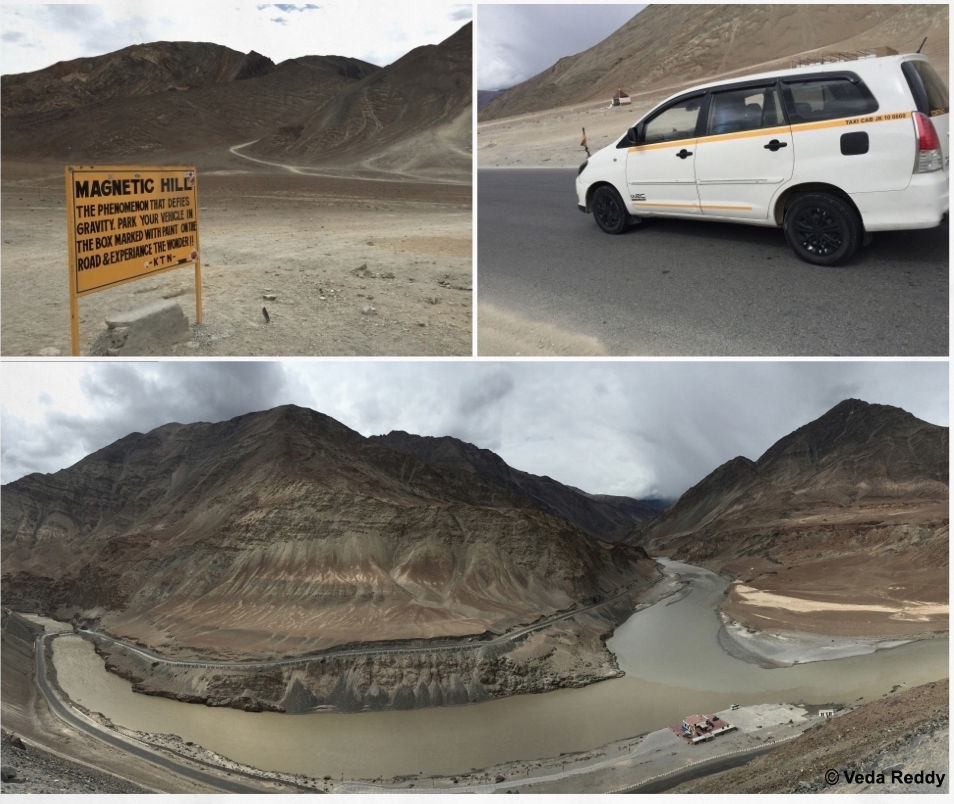 On day 3, we started at 8 AM. Our driver did leave us with a lingering thought that we were going via Khardung-La pass at a height of 18000 ft above sea level and the highest motorable road in the world. As we reached Khardung-La, it struck me what it means by the altitude change, you start noticing every breath you take. Adding to the adventure, it started to snow heavily and it became quite impossible to drive on the snowy narrow roads. Vehicles were swaying and we were halted for almost an hour for the roads to get cleared.

After a thrilling drive, we reached our camp, Nubra Organic Retreat in time for lunch. This place is called ‘organic’ because everything they cook is grown in their camp area and same is offered to the guests. We had a sumptuous lunch and decided to relax for a couple of hours. The tents were self-equipped with bathrooms and beds with heavy duvets. It makes you feel comfortable right away. Right by our tent was a small rivulet; apparently, the water comes from a glacier above the hill and continues to run across the village in the hills.

Couple of attractions around the place are the naturally created sand dunes and Bactrian camels (double hump camels). In the evening, we went to see the Bactrian camels; these camels are slightly smaller in size compared to the usual camels. Locals claim that these camels were used by traders during days of the famed ‘Silk Route’, and originally belong to Central Asia.

Next morning, after breakfast, we started our journey back to Leh, via Khardung-La pass. This time, our drive was pretty smooth without any hindrance. We reached Leh in the afternoon and spent the evening strolling around local markets, cafes and restaurants. 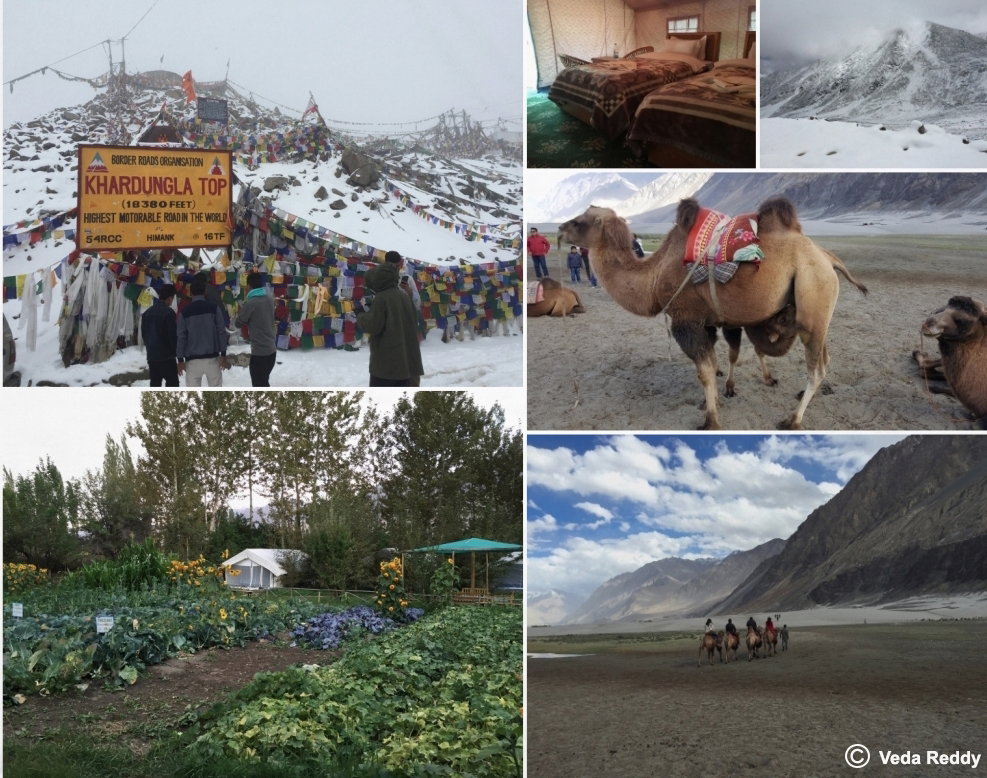 It was again a travelling day to Pangong Lake via Chang La pass. The 5-hour drive was spectacular with breathtaking views of the snow covered Himalayas. The Lake is the highest (4267M) salt-water lake in the world, situated along the India-China border. About 15 kilometres before reaching Pangong Lake, we started to see glimpses of the lake and as we were nearing Pangong Lake we were awestruck and speechless. The Lake is known for its crystal clear blue water that changes shades to green, purple and turqoise. The lake was scenic and picturesque beyond imagination. We spent the rest of the day at the Lake admiring its beauty.

We stayed overnight at the MarTseMik Camp, which was as well equipped as the Nubra camp. The Camp was right across the lake - when you're at Pangong Lake, the lake is also with you.  It gets pitch dark at night and roaring sounds of winds kept us entertained. Tired by the days’ travel, we snuggled in the heavy blankets as it was pretty chilly at night, owing to the proximity of water and of course not to forget you are way high up in the mountains. Rest was taken care by the camp people, hot water bags and heaviest quilts added to our comfort and warmth. Apart from the chilly night, we didn’t have any complaint as such. 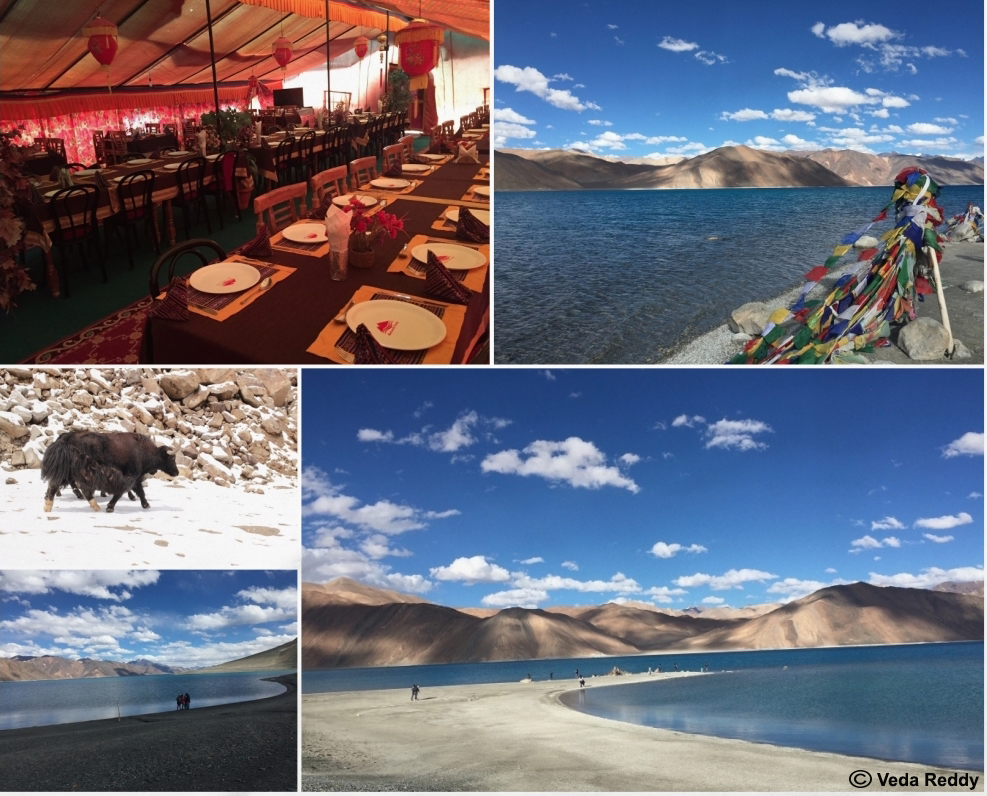 With packed breakfast, we started at 6 AM. the next day. As we started driving along Pangong Lake, it started snowing, well it wasn’t heavy but just the presence of it made us feel awesome. We reached Tso Moriri in the afternoon. Tso-Moriri is quieter compared to Pangong and this place sees fewer tourists or no tourists sometimes. We admired the untouched beauty and enjoyed the calmness. We spent overnight at the Nomadic Camp.

At 6 AM the next day, we bid farewell to the camp and the lake before starting our journey back to Leh (7 hrs drive). We drove past the second highest pass between Manali– Leh Highway at 17480 ft. Tso Moriri is a high altitude Alpine lake, picturesquely located in the secluded and breathtakingly beautiful Rupshu Valley. Along the Tso-Kar circuit, we spotted different species of birds including the endangered black-necked crane. We also visited the Hemis monastery en-route before heading back to our hotel in Leh. 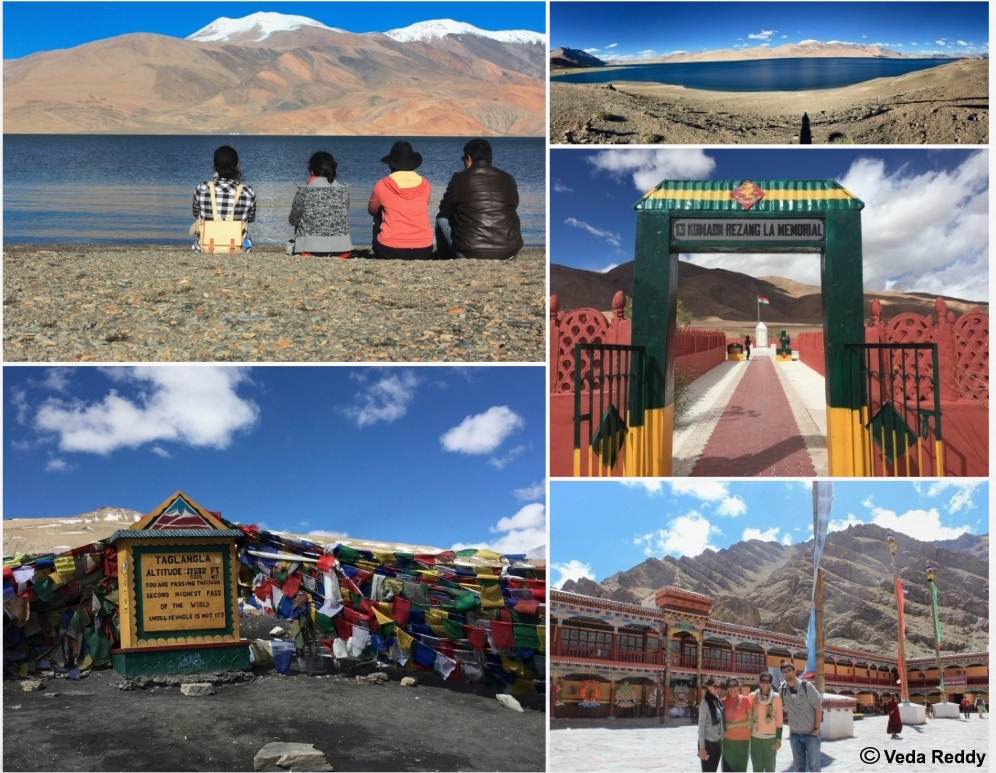 Our last day was spent in and around Leh. Our first stop was Shanti Stupa. It is a small religious place/monastery with a huge Buddha statue overlooking Leh villages. This pure white dome with a huge golden Buddha statue ingrained in it gives an absolute aura of peace. It was a bright sunny day, so it just reflected the calmness of the place. Then we headed to Leh Palace and Shey Palace. Afterwards, we visited the Stok Museum which houses the Royalty of Ladakh.  Our last stop was the fortress styled monastery of Thiksey which was the highlight of the day! This monastery was magnanimous and beautiful. We spent a couple of hours here and had lunch at the cafe at the monastery’s entrance.  After a scrumptious lunch, we headed back to Leh city centre and spent our final evening indulging in some shopping at Leh Market. 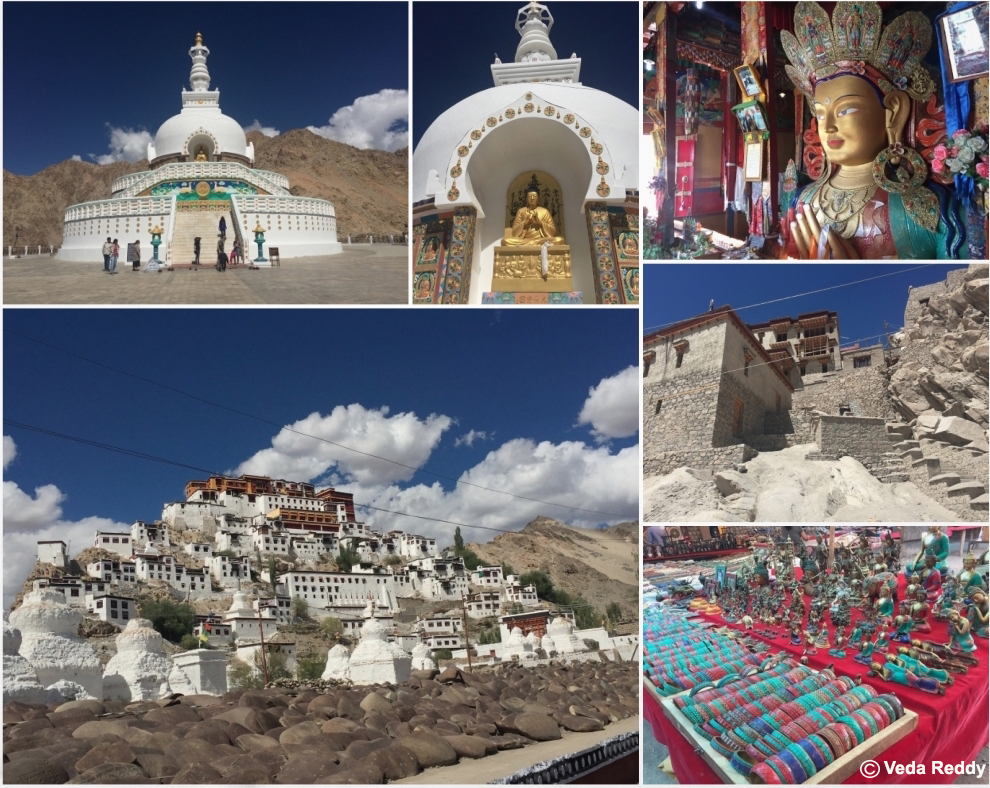 Words and pictures cannot do complete justice to Ladakh. One has to experience the magic of travelling in the Trans-Himalayan region. Please contact our travel experts at travel@planetwildlife.com for tailor-made trips to Kashmir and Ladakh.