Tanzania can truly claim to be the home of the Classic Safari as, in my view, there's no better place to enjoy an enriching wildlife experience than here. When my family and I landed in Africa, I could tell I had just stepped into a whole new world! We arrived at Kilimanjaro Airport where we were greeted by our guide, John, and driven to Arusha for a quick lunch before heading out on our African adventure.

We set out on our ﬁrst game drive in Lake Manyara National Park and our adventure began. As soon as we entered the park we saw hundreds of baboons. I never expected to see so many baboons—they were everywhere! A huge baboon even tried to get into our jeep! It climbed over the window, looked for some food and eventually left.

Tip for wildlife enthusiasts: If you encounter any wild animal up close, do not move suddenly or strike at it. Back off slowly. In most cases, the animal is more scared of you than you are of it and it will scamper away.

I also got very excited when I saw a giraffe up close in the wild! It was so close, right next to our jeep, that I felt like I could touch it! On the rest of our game drives we saw more giraffes, elephants, impalas, warthogs, and many smaller animals. But most excitingly, we were lucky enough to spot a tree-climbing lion! It was a female lion that was sound asleep on a tree branch. Our guide, John, said he’d only seen them three times that year, so that was pretty special.For me, it was still hard to process that the animals we have seen were in the wild in Africa and not just in a zoo. It still seems surreal! 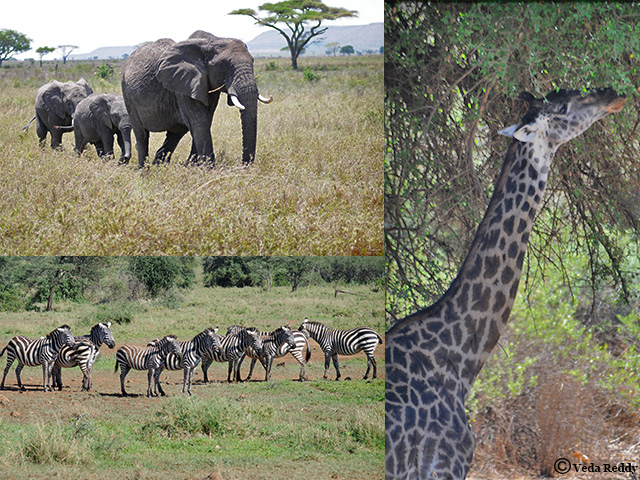 After spending a day in Manyara, we continued on towards Serengeti. Describing the entire Serengeti experience in a few words - it was awesome! I couldn’t believe how many hundreds of zebras and Thompson gazelles there were! The open plain was just full of gazelles, zebras, and ostriches. Soon after entering the park we saw two male lions lounging by a watering hole–John said they must be brothers, otherwise male lions wouldn’t hang out together. We also saw a leopard in a tree. Leopards are apparently very difﬁcult to spot, so whenever one is spotted there is a “leopard jam” of safari vehicles.

The next day, we went on a morning game drive and saw pretty much every animal and bird in the Serengeti. The highlight was seeing a cheetah family—mom and her three cubs. As we were watching the cheetahs, we got a report over the radio of a buffalo kill by a pride of 15 female lions and cubs! It was a spectacular natural drama to witness! I could’ve sat and watched the lions for hours.

Later that evening, we drove on to the hippo pool—a spot where hundreds of hippos congregate. In my opinion, they really are rather disgusting animals! They just lay around in their own ﬂoating poo all the time. And the smell is quite unbearable! We also saw a crocodile sitting on the bank here.

After a full day game drive we returned to Serena Lodge for dinner and some rest. I loved how this lodge blends into its surroundings so well. Our hut was cozy, comfortable, and had great modern amenities. Our private balcony looked out over some beautiful wilderness. We had dik-diks come almost up to the room and could see zebras passing close by as well. The food at the lodge was incredible. The breakfast buffets had a lot to offer and it was really hard not to over indulge.

What was unique about the Serena Lodge was that since there are no fences allowed in the parks in Tanzania, and the lodge is situated right in the middle of Serengeti, we needed a guard to take us to and from our lodge to the restaurant (located a few 100 feet away), just to make sure that the animals stayed away! I loved the Serengeti and the stay in the Serena lodge was really a treat. 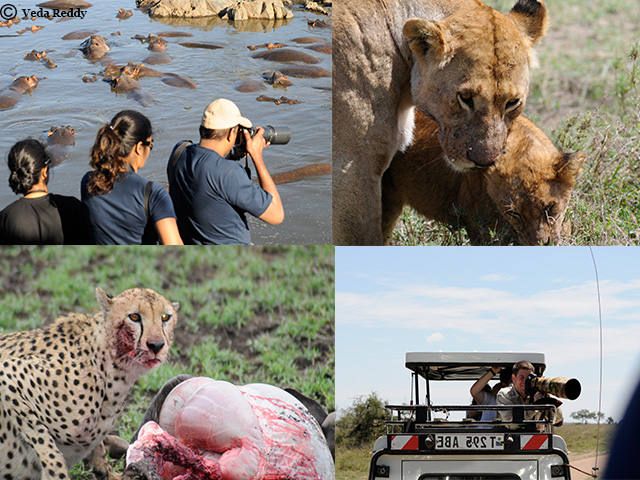 After three fantastic days in Serengeti, I felt like I’d watched the Lion King play live!

We then drove to Ngorongoro Crater where we stayed at the Serena Lodge perched right at the edge of the crater. This exclusive lodge enjoys breathtaking views of the UNESCO World Heritage Site of Ngorongoro. It was great staying here, and I remember a time when there were elephants grazing right in front of our dining room!

We woke up early to drive into the crater, and it was gorgeous! This is a must-see for all adventure travellers. The ﬂoor of the crater contains an incredible number of animals and birds. Upon descending to the ﬂoor, we headed towards a lake where there were thousands of lesser and greater ﬂamingos. My only regret was that the road did not go close to this site. We also spotted more elephants, zebras, wildebeest, and cheetahs. Luckily, we even spotted two lions with a fresh wildebeest kill, while hyenas were hanging around in the background. At lunch break near a pond, there were white pelicans and black-shouldered kites ready to try to steal our food - John suggested that we stay within the vehicle while eating.

Later, we also sighted the endangered black rhino. It wasn’t too close though. There are only 25 black rhinos in the crater and we saw two of these, so we were extremely lucky. That completed the Big Five—lion, elephant, leopard, African buffalo, and rhino—for us!

John said, for most of the 20th century the black rhino was the most numerous of all rhino species and there were probably several hundred thousands living in Africa. During the latter half of the 20th century, rhino poaching increased dramatically with hundreds killed each year for their horns. Now unfortunately, rhinos have been driven to near extinction. 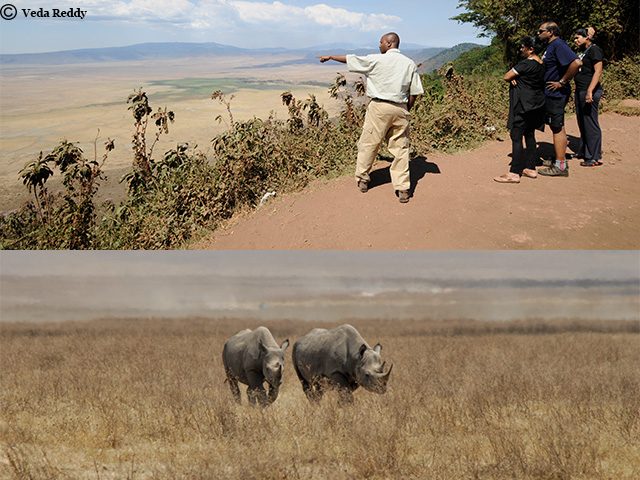 On the last day, on our way back to the airport, it was partly cloudy and I was a little disappointed that we couldn’t see Mt. Kilimanjaro. However, after boarding the ﬂight, once it took off, I looked out the window and there above the clouds was the summit of Kilimanjaro! It was the perfect way to cap off the trip and I felt like I had seen everything! If I ever feel crazy enough to climb any mountain, it would be Mt Kilimanjaro!

Tanzania is a truly world class place to see birds and animals. I loved it! If you want a lazy and relaxing holiday then Tanzania isn't for you. But if you want adventure and excitement and an experience to remember forever then you will love Tanzania too. To go on a safari in Tanzania is, and will always remain a fascinating and exclusive experience!

Email travel@planetwildlife.com for custom made tours to explore Tanzania.