Huffing & puffing its way through the lower reaches of the Eastern Himalayas. The Darjeeling Himalayan Railway is lovingly called the Darjeeling Toy train. This Toy Train winds its way through iconic loops, picturesque reverses, bridges, and tunnels. From time to time panoramic views, either of the mighty Kanchenjunga or the sprawling tea estates come into sight, but the ride never strays away from picture-perfect nature itself. This Toy Train, with its innovative transportation design on mountainous terrain, which was also influential in the socio-economic development of the region made the Darjeeling Himalayan Railway as the second train to be selected as a World Heritage Site, after the Semmering Railway of Austria.

This boutique hotel flanked by the Himalayas comes with striking views of cottony clouds and expansive tea fields, taking you on a poetic journey. Its timeless bungalows are a saga in itself. 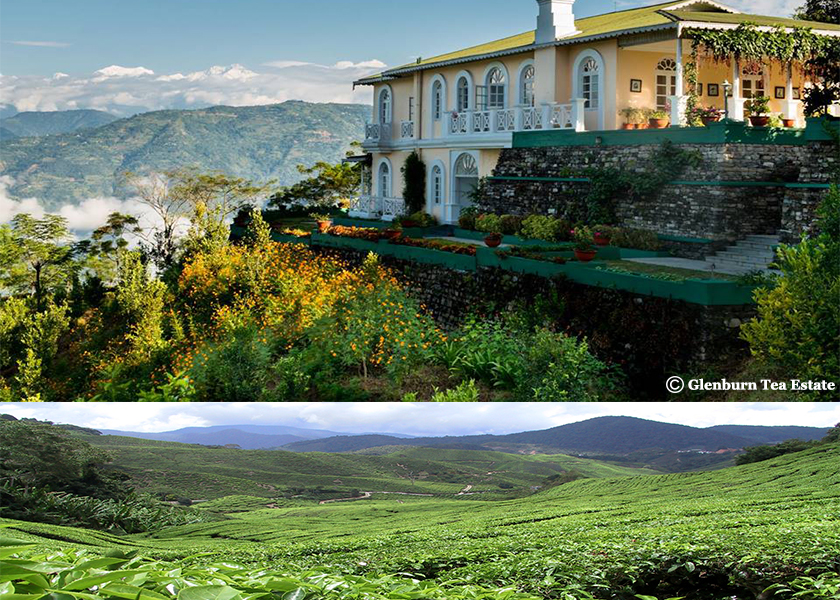 Come aboard the Kalka-Shimla railway for a journey of a lifetime. Meandering through the hills, with green vistas, tunnels, and never-ending stunning views, the Kalka-Shimla route is nothing short of romantic. Surrounded by dramatic landscapes, this train connected Shimla, the Summer Capital of British India with the rest of the railway systems. What truly makes this journey unique is the number of tunnels the train passes through. 102 tunnels to be specific. Out of the 107 tunnels and numerous bridges, the world's longest tunnel (at the time of construction) was built skilfully as a part of the train route.

Rejuvenate your senses with a bespoke experience at The Wildflower Hall, Shimla. Set amidst cedar woodland, Wildflower Hall comes with tranquil views of the Himalayas. 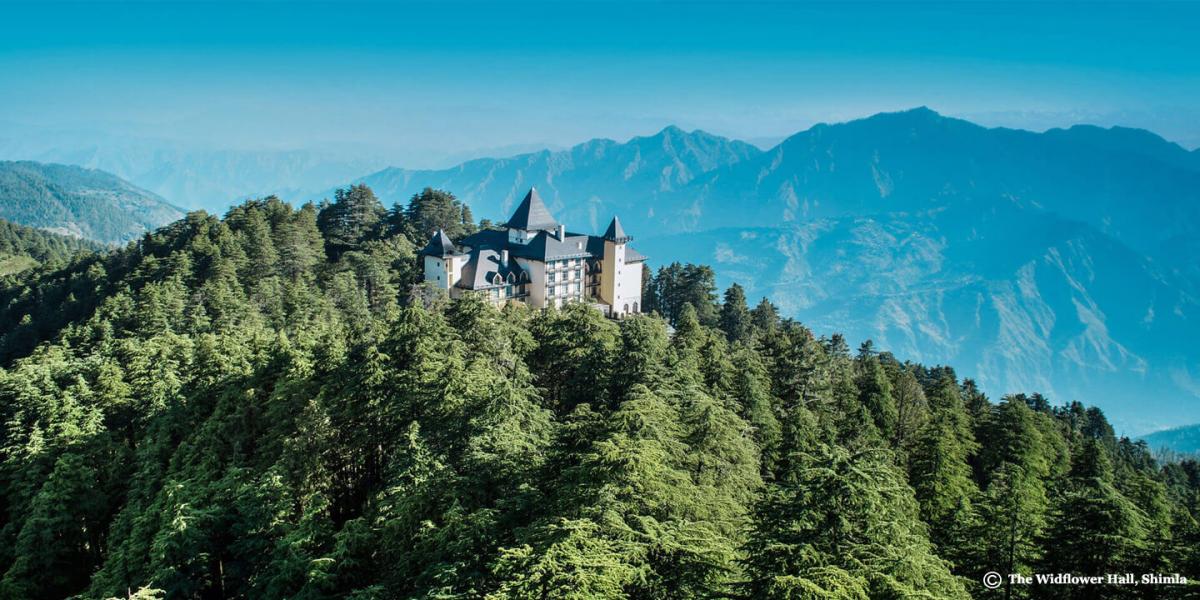 Manas is not only a National Park, Tiger and Elephant Reserve but also a birdwatcher’s paradise and home to the Great Indian Rhinoceros and other threatened species of India. Situated near the foothills of the Himalayas, the river Manas separates Manas National Park from the Royal Manas Wildlife Sanctuary in Bhutan, on the other side of the border. Manas is a biodiversity hotspot and every wildlife enthusiast’s delight. The Manas National Park is not only home to various endemic species, but also to tropical evergreen forests, and a sanctuary to a variety of threatened species. But this was not the case when the National Park was first elected to the UNESCO World Heritage Site List. In a great comeback success story, the National Park was withdrawn from the 'World Heritage Site in Danger list' in 2011. The rich bio-diversity,  Eastern-Himalayan Landscape, scenic wilderness give Manas National Park an edge over its counterparts within India and even the World.

A bucolic property set on the fringes of Manas National Park; Bansbari Lodge is just the thing for a wildlife enthusiast to spend some quality time in the lap of nature. 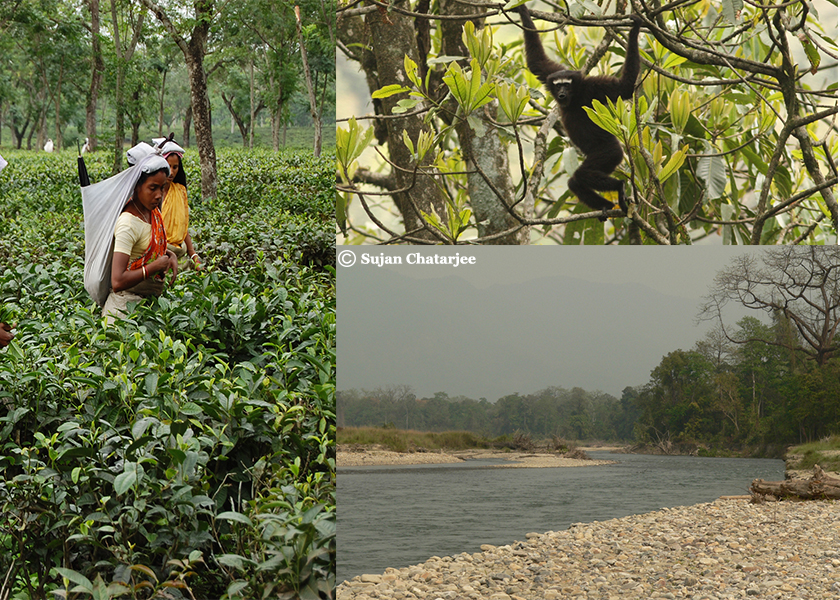 Kaziranga is a land where the animals roam free. It is the land of birds, rhinos, elusive tigers, elephants, stupendous flora and fauna; Kaziranga is this and much more. Experience an enchanting land, where every turn around the corner is a new landscape and certainly a birder's delight. This landscape largely remains undisturbed and natural, making it the perfect area not only for One-Horned Rhinoceroses but also to panthers, bears, thousands of birds and since it is crisscrossed by four rivers, a  variety of riverine species thrive here.

Soak in the wilderness experience with a blissful stay at Diphlu River Lodge. The lodge’s uncompromising views of the Diphlu River or the golden mustard fields add to the whole safari experience of jeep safaris or a dolphin boat cruise. And every room comes with a view. 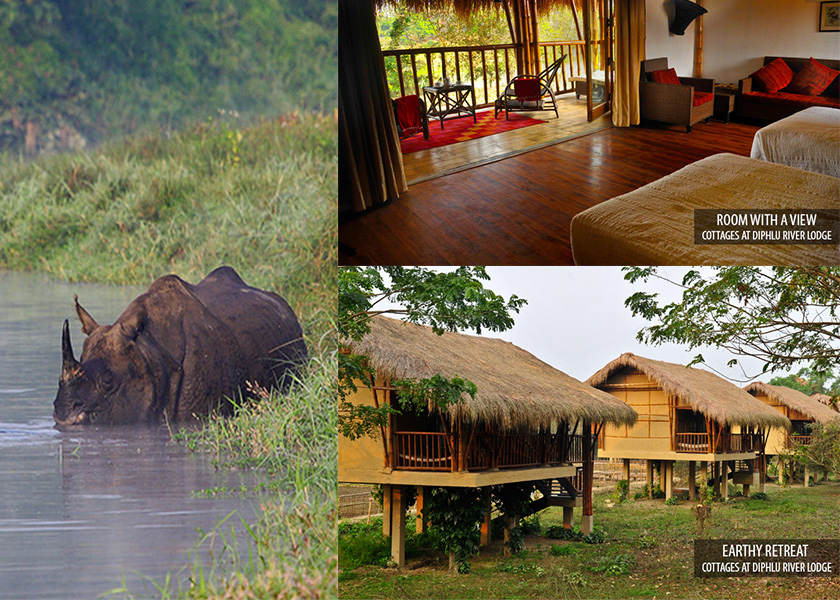 Discover the architectural Opulence of this UNESCO World Heritage site which is a profusion of intricately carved sculptures and aesthetic beauty. The meticulously carved Hindu and Jain temples’ grandiose have attracted architecture and history buffs alike. Of the 85 temples that were built, only 20 of them are standing. These temples are living examples of the exquisite Nagara-style architecture. Built during the zenith of the Chandela dynasty, The Khajuraho Group of Monuments are regarded as icons of Indian Art & Architecture. Many world-renowned historians like Ibn-Battuta, Abu Rihan-al-Biruni wrote about this famous World Heritage Site.

Sitting in the quiet countryside of Central India, on the banks of River Ken, is the bucolic Ken River Lodge. The lodge is a harmonious combination of rustic and traditional, serene and luxurious- all at the same time. 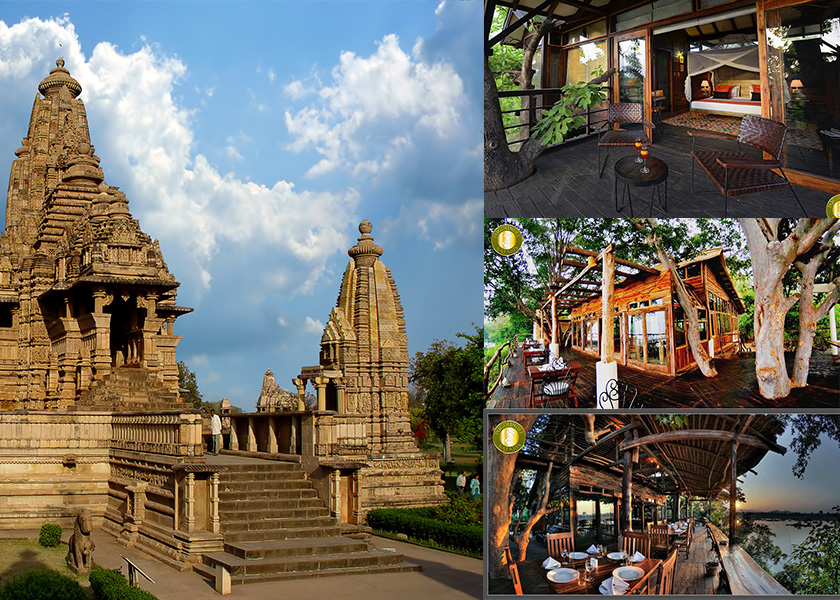 Hill Forts of Rajasthan: Discover the architectural opulence of these glorious forts. Chittorgarh, Kumbhalgarh, Ranthambore, Jaisalmer are divided by names, united by grand architecture. These Forts are examples of the architectural mastery of the Rajput rulers, which portrayed not only their expertise in architecture but also their love for tradition, culture and religion.

6. Chittorgarh Fort- The extensive ramparts, numerous gates, intricately carved pillars of this colossal fort work in unison and transport you into the era of the erstwhile Kings. The Chittorgarh Fort has been the muse to several historians, writers, and even photographers. Rising above the golden plains in southern Rajasthan, the Chittorgarh Fort boasted of numerous water bodies within the Fort.

The Bassi Fort Palace is all about heritage opulence and modern-day amenities, yet its essence lies in the reminiscent times.

7. Kumbhalgarh Fort- Did you know that the wall of Kumbhalgarh Fort is one of the longest in the world, only second to The Great Wall of China? Apart from the massive gates, and extensive wall and expansive views of the Aravali Hills, the fort houses two significant temples one Hindu temple and one Jain temple. The Kumbhalgarh Fort is believed to be the birthplace of the Mewar King, Maharana Pratap, a celebrated warrior, and King.

Set in the picturesque Aravali region, offering panoramic views of the Marwar Plains and the Kumbhalgarh Fort, where every room comes with a view, Fateh Safari Lodge certainly makes for an enchanting experience.

8. Ranthambore- Ranthambore Fort is located within the iconic Ranthambore National Park; though best known for its tigers, the park is also home to a wildlife-rich habitat and the jaw-dropping beauty of the Fort is not to be missed. This Forest Hill Fort is also a Monument of National Importance.

Experience the imperial luxuries and comforts fashioned around Mughal & Rajput styled architecture in this palatial property. Nahargarh is also the perfect base to explore the wilderness of Ranthambore National Park. 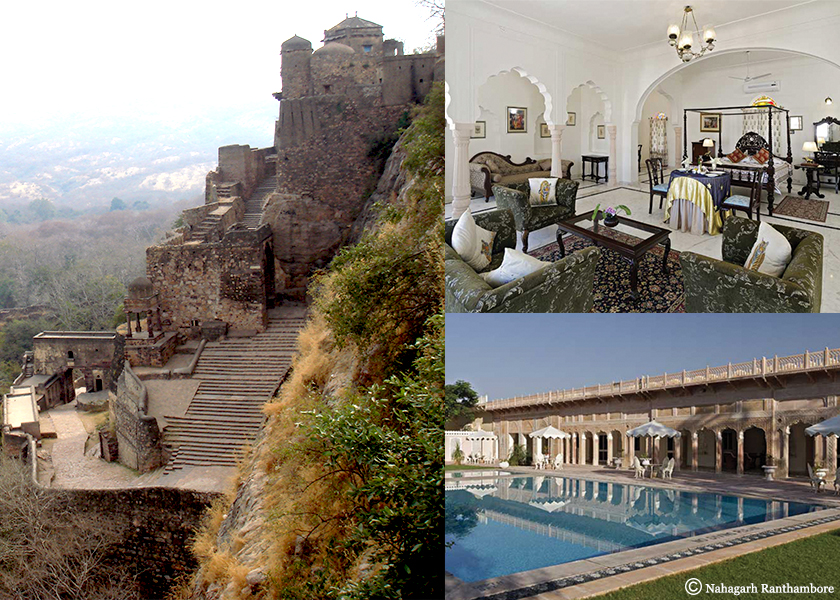 9. Jaisalmer-Jaisalmer Fort is an iconic tri-walled fort. But did you know that it is one of the largest fortified living cities in the world? Nestled among stunning sand dunes of the Thar Desert, magnificent Havelis and ornate temples, Jaisalmer Fort is anything but ordinary. The Golden hue of the monument earned it the name Sonar-Quila or Golden Fort.

The Gulaal is a luxury boutique property, celebrating the Jaisalmer Haveli architecture. Be welcomed to lavish spaces, balconies, latticed passageways, and the stunning views of the Jaisalmer Fort.

To explore UNESCO World Heritage sites with Planetwildlife, contact our travel experts at travel@planetwildlife.com  for more information and tailor-made trips.