I visited Tadoba Andhari Tiger Reserve this January, along with my family, for a tiger safari. Here’s my experience.

“One of the most interesting facts about Tadoba Andhari Tiger Reserve (TATR) is that it is a habitat for approximately 100 tigers and more than 300 hundred species of birds. The 1,773 sq.km expanse of the reserve gives you a lot of scope to explore the vivid fauna comprising Sloth Bears, Dholes, Leopards, Indian Gaurs, Spotted Deer, Sambar Deer to mention only a few. Tracking the trail of the svelte princess of the jungle – Maya and her cubs, or observing smaller wildlife and birds in their innate existence, is what the safari at TATR offers.

Tadoba Andhari Tiger Reserve is a terrain that warrants a visit more than once.”

The above excerpt is from the Brochure of the resort - Bamboo Forest Safari Lodge, where my family and I vacationed in for 2 days and 3 nights this January. 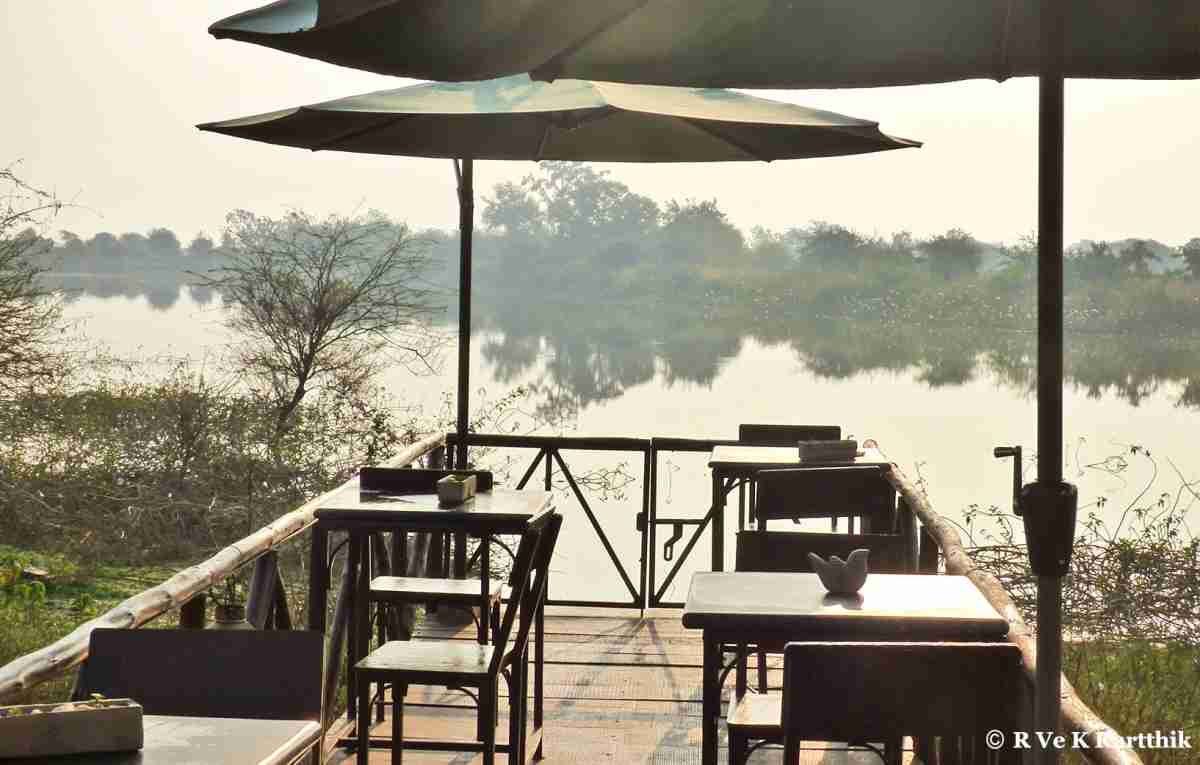 We had decided to drive approximately 480 km to the resort from Hyderabad, though one could easily travel to Nagpur via train or flight, which is a mere 98 km to the Lodge. The road trip was enjoyable till we got to the town. It was incidentally having its Friday Market and the last leg became a slow crawl. But once we reached the Lodge, it felt as if we had achieved quite something.

The staff was already expecting us and the manner in which they catered to us was something remarkable. I was beginning to understand why this Lodge was highly rated and recommended by all. The Lodge at least in my eyes was easily of five star standards. They catered to everyone’s needs and one of us has an allergy to peanuts and they ensured for the remainder of the trip she would be taken care of and from what I’ve seen they did a damn good job of meeting their commitments. As we enjoyed our welcome drink of high tea on a wooden patio, we met Mr. Mehta the owner of the resort and it was quite refreshing to interact with someone who loved and cared for wildlife and not just concerned with running a luxury resort near a Tiger Reserve.

The wooden patio of the main building overlooked a lake and extended outward where one could see the bank of the lake. It is a great spot for Bird watching and sightings of Painted Storks roosting nearby vouch for this. It was at this same wooden patio that we were sumptuously fed every night under the starry skies with the full moon looking down upon us, even as the brazier and the hot soup tried to null the chill of the winter night.

The next morning, we set out on our first Safari –For the 4 Safari’s we had, we drove in a specially designed Scorpio Getaway vehicle, driven by Pramod and accompanied by Guide Dilip. A fifteen-minute drive in our jeep took us to the Kolara Gate at 6 in the morning. With the moon still high in the sky, it was a chilly 13 degrees we were provided blankets to keep ourselves warm. Despite all of us wearing jackets, it was colder than any of the Safari’s I’ve ever been on. Upon entering the reserve, we were given face masks to protect us from the dust that kicked up from the dirt roads inside the park.

Unlike other Indian national Parks, Tadoba has no zone system. Kanha for example, is split into zones, where a Safari assigned to a certain zone may only explore within the said zone. Tadoba left a refreshing amount of freedom for one’s Safari experience. 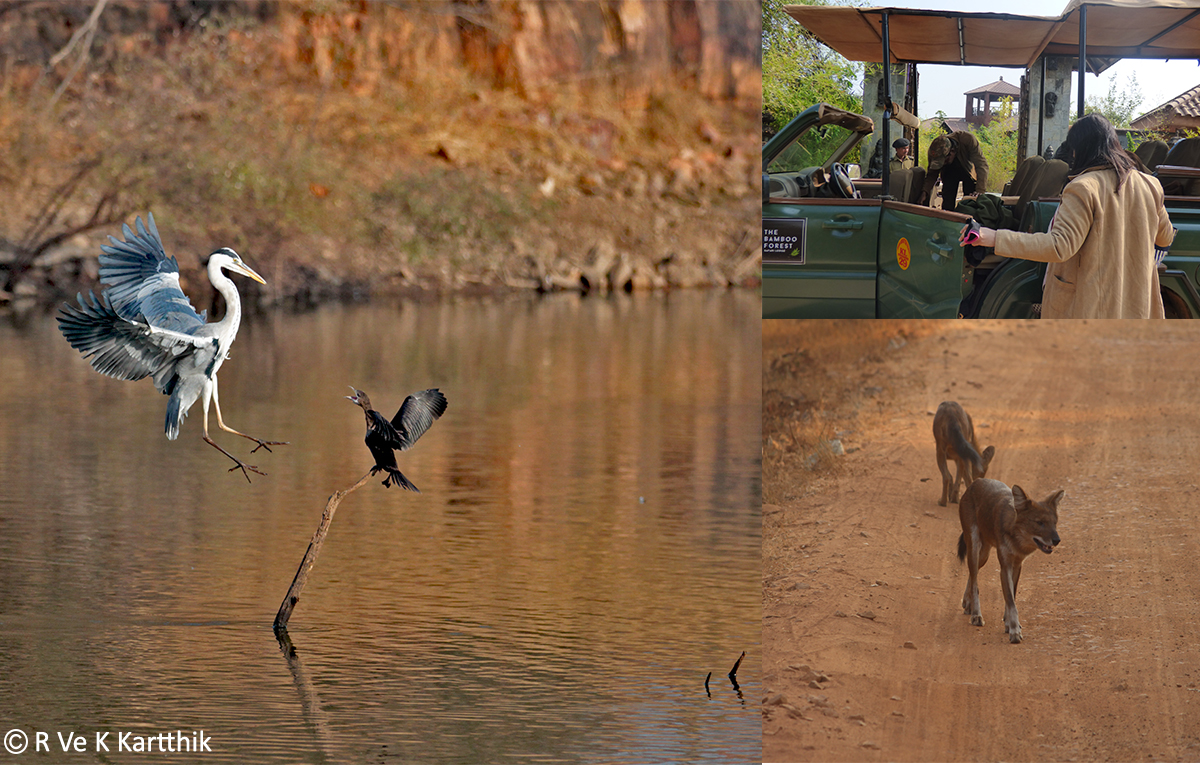 The morning turned out to be uneventful as we came across no Tigers, but we got to see the Reserve in detail. We came across Sambar Deer, Spotted Deer, a cautious Wild Boar, a rare Barking deer, Indian Gaur, Warblers, Drongos and even Jungle Fowl & Crow –“the usual suspects” so to speak. While we stopped at a designated rest spot within the reserve to enjoy our specially prepared picnic breakfast, we had learnt from the other Safari jeeps rolling by that few of them had a glimpse of a Tigress named Choti Tara and her little cubs. After our hearty breakfast, we tried to see if we could share that same luck to sight Choti Tara, but to no avail. The pug marks were spotted and we waited patiently and heard the silence of the jungle hoping that Choti Tara and her cubs would make an appearance.  As we moved on, our guide Dilip kept our spirits up and interested by telling us the names of different Tigers sighted in and around the areas we were driving. We drove to the massive Tadoba Lake in the reserve in our quest and came to learn that the Lake was home to Crocodiles as well.

The evening Safari started at around 2 PM and turned out to be quite exciting as we reached a spot near a small pond. Our jeep halted behind a line of other jeeps, and we spotted Tigress Maya –the main attraction of the reserve, popularly known as “The Princess of Tadoba”. Maya decided to have a quick dip in the waters and coming out of hiding was her now teenage cub. In a trance, our eyes followed their every move till they walked into the brush and then came out only to walk on the road for a solid 30 minutes to which we had ourselves alongside a procession of jeeps accompanying them. 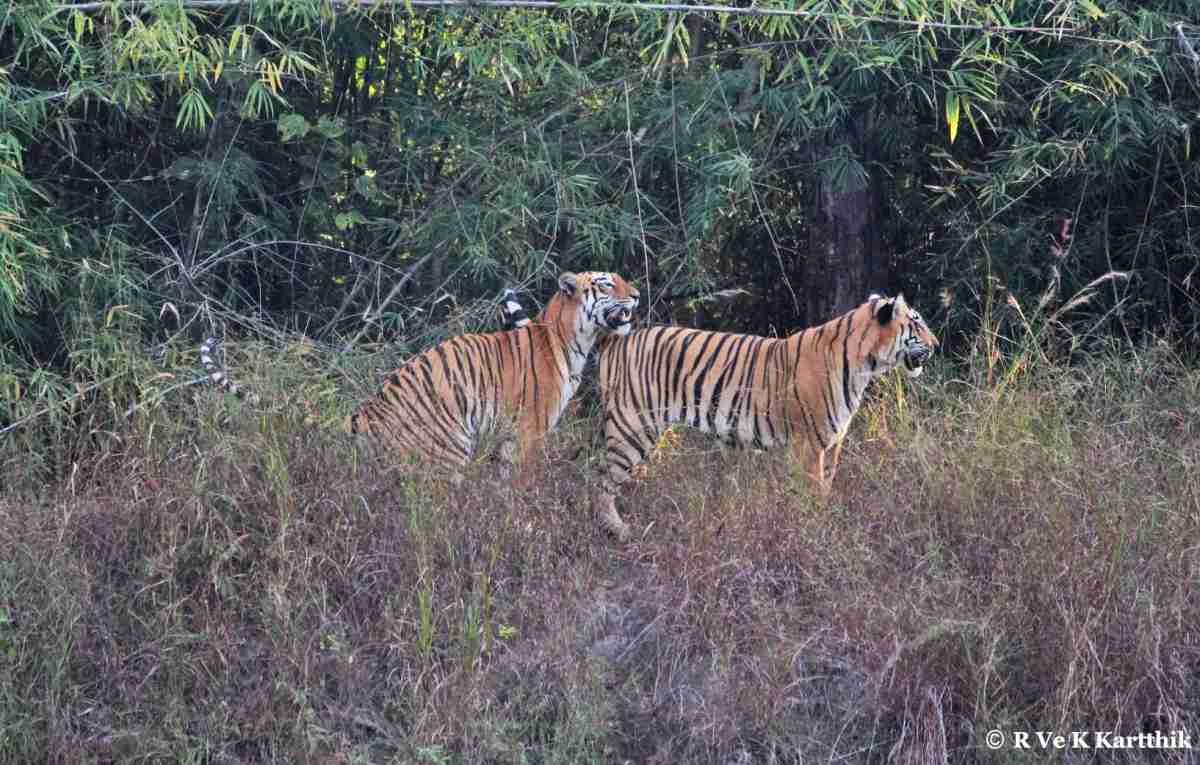 We then had an interesting encounter with a pair of Dholes which walked out onto the road and sat quite close to our jeep. We paid witness to how many who come to these reserves for the sole reason of spotting a Tiger; to the point where a candid encounter with the pair of curious Dholes was spoilt by a jeep behind us which decided to press on around us and spooked the pair away much to the ire of my younger brother.

As we wound down, we decided to see if we could spot some Mugger Crocodiles basking in the sun by the bank of the lake. While I did spot a mongoose skirting behind a tree and some open billed storks we had no luck spotting any crocodiles.

Next day, the morning Safari turned out to be a true surprise. We decided we would spend our day seeing the other areas of the park and not necessarily chase the elusive tiger. It’s something my younger brother decided in Kanha that in one Safari we wouldn’t search frantically for only tigers but incidentally had an incredible encounter with a Tiger despite that decision, so it was decided. On the way as we reached the Pandarpauni area of the park, we saw a line of jeeps and we didn’t need to be told twice that they spotted a Tiger, it was Princess Maya and she had graced us with another sighting in a nice clearing but once that was done we sped towards another area called the Navegon Meadows after crossing which, there was another rest stop scheduled for us to have our breakfast. The area was quite like a Savannah in how it looked, while we spotted a few birds like the Black Winged Kite, a Parakeet and some shrikes, we stopped abruptly when our driver Pramod pointed at something in the distance and named the animal laying lazily in the grass, we found its ears poking in the grass but we couldn’t get a good look at it and frankly as we decided to move on to have our breakfast I thought he must have spotted a jackal and he may have assumed it as the one he named. Of course to my delight, I was proven wrong as we went back the same way and in the opposite direction we had a much better view and as another jeep pulled up behind us and asked us what we spotted I turned around and said “Wolf”. 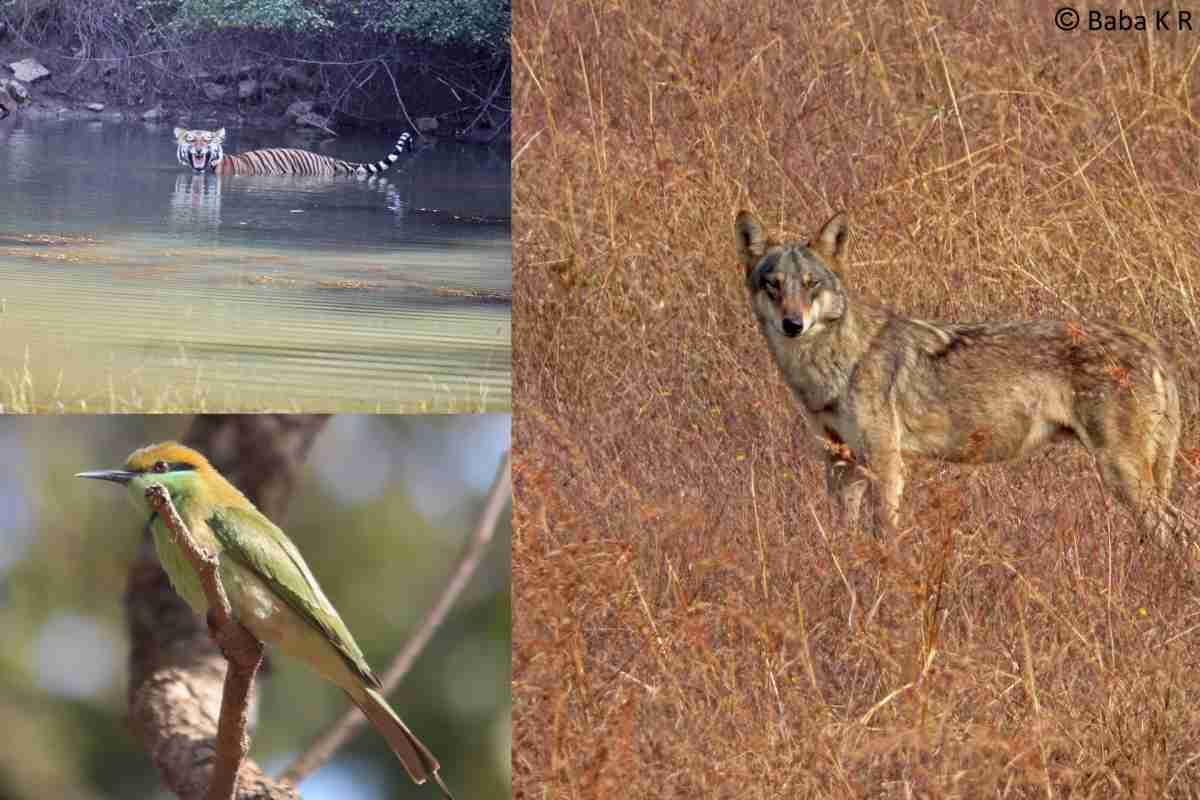 The disbelief on the Naturalist’s face at that point was worth seeing as he mouthed wolf and climbed up to get a better view and after only spotting its profile in the grass till it found we were too noisy and decided to move on and truly it was then that any doubts that it was anything but a Wolf were thrown out of the window. There it was a rare Lone Wolf, pardon the pun, moving about and deciding to give us a nice few opportunities to grab it on camera especially when it decided to cross the road and walk off. After that rare sighting, everything else was laid back for us, apart from finally spotting the crocs lounging about at the lake.

As luck would have it, while we were caught up with the Wolf sighting, we missed another sighting of a Male Tiger named Matkasur walking boldly and straight towards the Jeep’s on the Tadoba Lake road. They had a long sighting of the Tiger walking by the lakeside and then drinking water from the Lake. Of course, the chatter and the clamour is always more for the Sher Khan than for Akela. 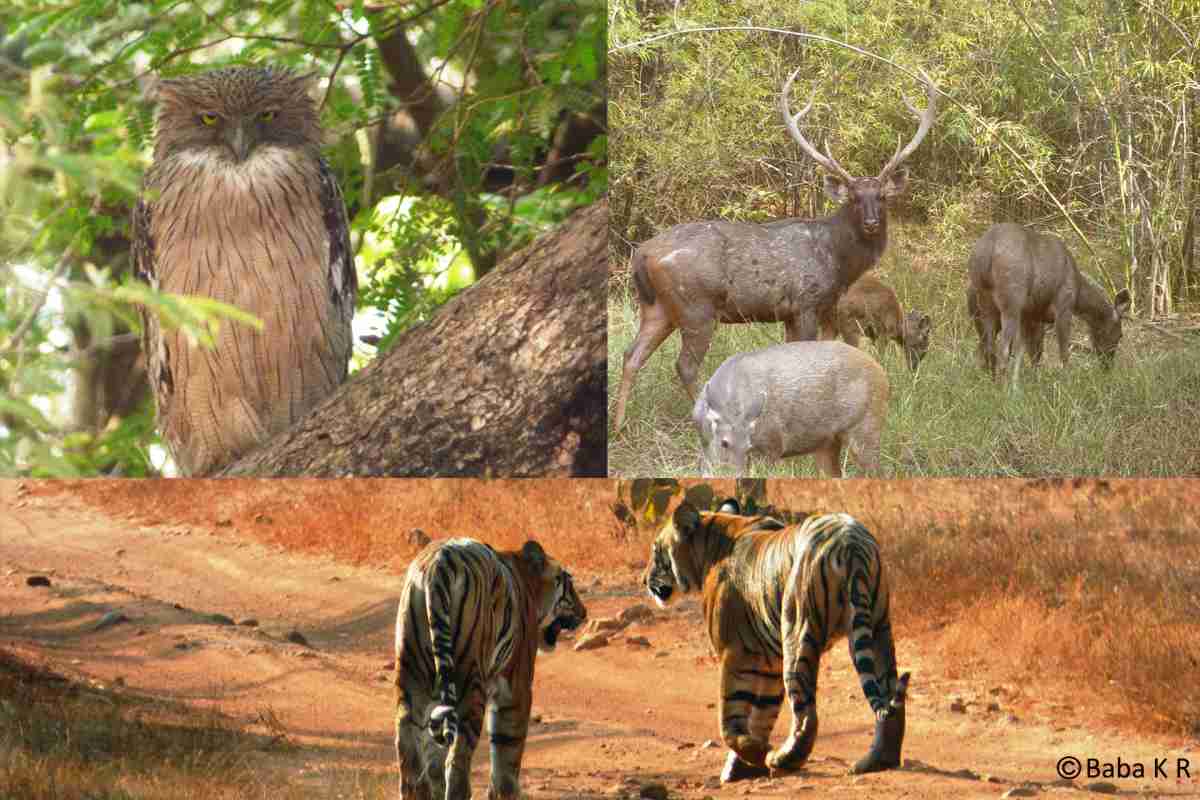 Then came the evening Safari in which surprisingly no Tigers were spotted, even within the inner areas of the parks and only one jeep which went to the outlier buffer zone spotted a Tigress prowling about and also sighted the ever elusive Leopard. We on the other hand, with that rare Wolf sighting in the morning, were just interested in cruising the reserve and tried to spot that elusive Leopard and Sloth Bear; which sadly still eluded my family. But we got a better view of the Mugger Croc basking fully in the sun on the lake bank without a care in the world, and in a nice spot was a Brown Fishing Owl roosting on a tree and from a distance it looked quite like it was glaring at us for disturbing its sleep and besides finding a number of Deer and an odd sight of a group of Langur sitting as if they were holding a council of some sort. I joked “They’re holding a Panchayat of course.”

After a hearty breakfast, we drove back to Hyderabad the next morning and as mentioned in the excerpt above, the reserve and the luxurious Bamboo Forest Safari Lodge warrant more than one visit and I for one, hope to vacation for more than 2 days next time around. Thank you PlanetWildlife, for meticulously planning and arranging this unforgettable trip for us!