A trip to the Poles is the ultimate travel goal, and often high on the bucket list for any adventurer. I recently had the privilege to check this off my list – I voyaged to the North Pole to explore the endless icescapes and dramatic landscapes of the Arctic, rich with flora and fauna. Since I visited over the summer, one of the many amazing things I experienced was 24 hours of daylight - the unique midnight sun. This is the best time to visit the Arctic by ship as you can spend all hours of the day looking out for distinctive wildlife such as polar bears, walruses, blue whales, seals, Arctic foxes and both resident and migratory bird species.

Day 1 began at the Svalbard Archipelago, a group of islands halfway between Norway and the North Pole, which is part of Norway’s administration, but isn’t officially part of any of its counties.

I got my first glimpse of Svalbard’s impressive terrain of mountains from the plane as I landed in Longyearbyen. My family and I had couple of hours to stroll around this beautiful town and local shops for some extra warm clothes before leaving civilisation. Early in the evening, we boarded the vessel M/V Plancius, our home for the next 8 days. When we checked into our cabins we were pleased to see our luggage already waiting for us. All the 100 guests on the ship soon gathered in the observation lounge where we were greeted and briefed about safety on board by our Expedition leader. 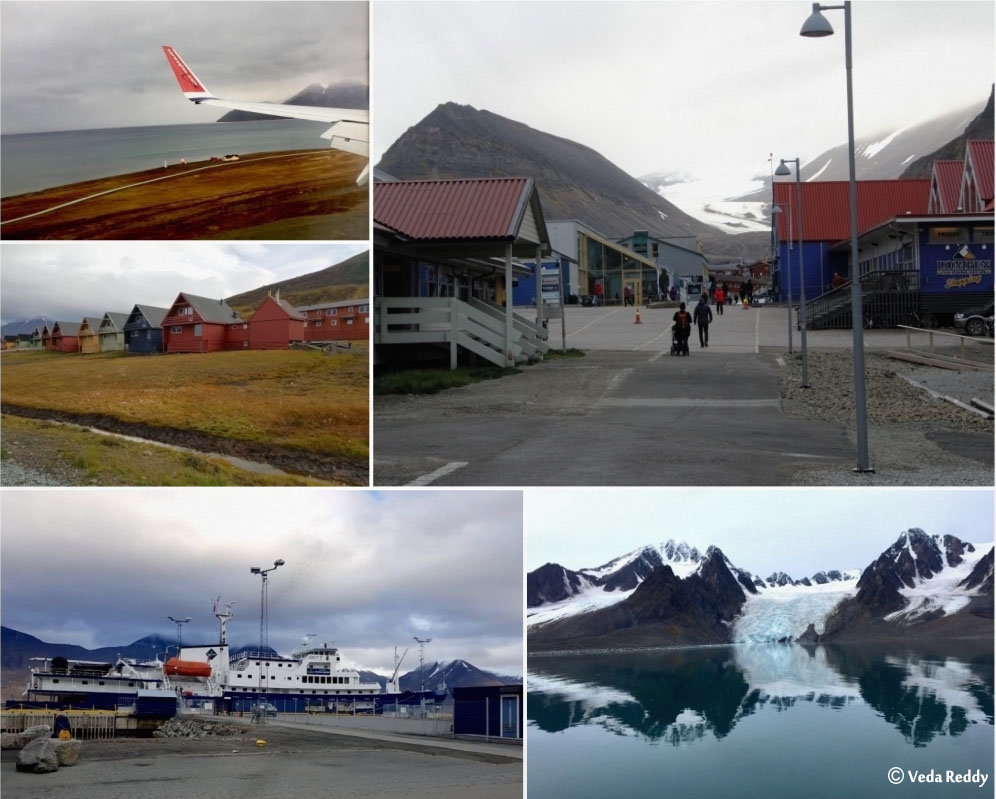 The Plancius navigated north. Our Captain joined us for the welcome toast and introduced the Expedition guides who would explore the wilderness with us. We then enjoyed our first scrumptious dinner.

Later that night, at around 10pm I heard the announcement of a Blue Whale spotted next to ship! I jumped off the bed in excitement, grabbed my jacket and ran up to the deck. The Captain navigated the ship maintaining a respectful distance to the whale so as not to disturb it. This gave us an opportunity to admire this magnificent animal. What a great start to the journey of a lifetime!

Next morning, many of us were out on deck spotting the birdlife - Northern fulmars, Kittiwake gulls and puffins. As we entered Raudfjord, we encountered two beautiful Blue whales - a mother and her calf. We spent a wonderful half hour cruising gently alongside them. 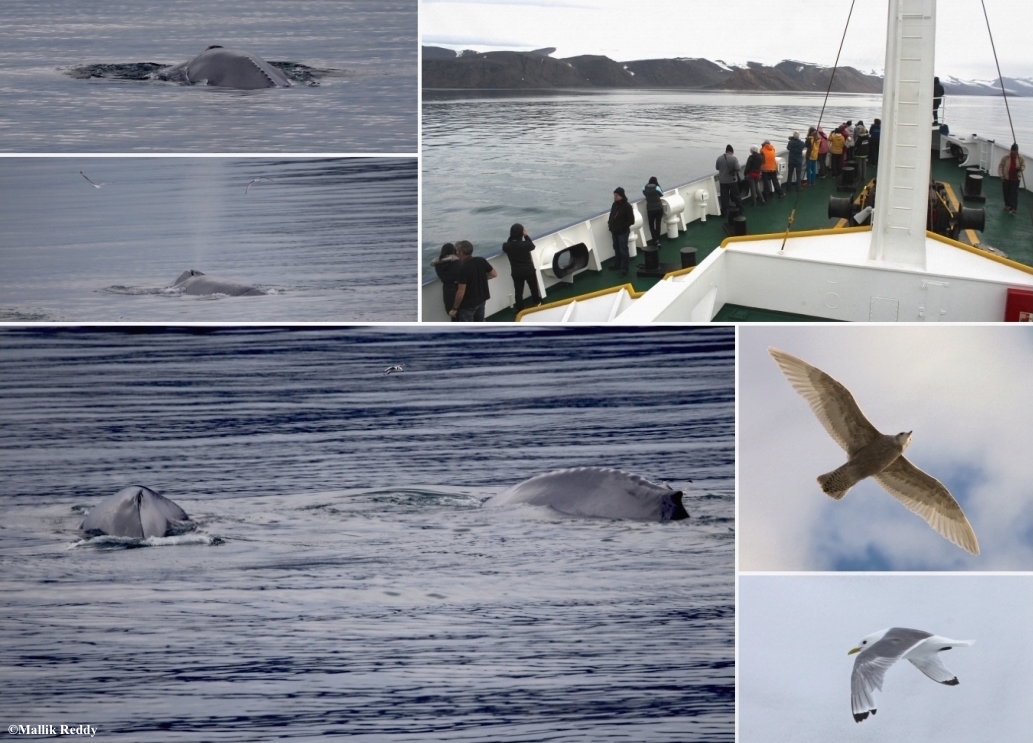 In the afternoon, we crossed the fjord to a beautiful secluded bay called Alicehamna. The expedition team went ahead to scout the area, and once they gave the all-clear we piled into Zodiacs and made our way to the first landing in Svalbard! The weather was not kind to begin with, and many of us got a little damp in the surprisingly heavy rain. We hiked up aiming to get a view over the bay. After an hour the skies began to clear and before long we were bathed in glorious sunshine. After an unforgettable few hours of hiking ashore in Raudfjord, we headed back to the ship, just in time for a hearty and well-earned dinner. 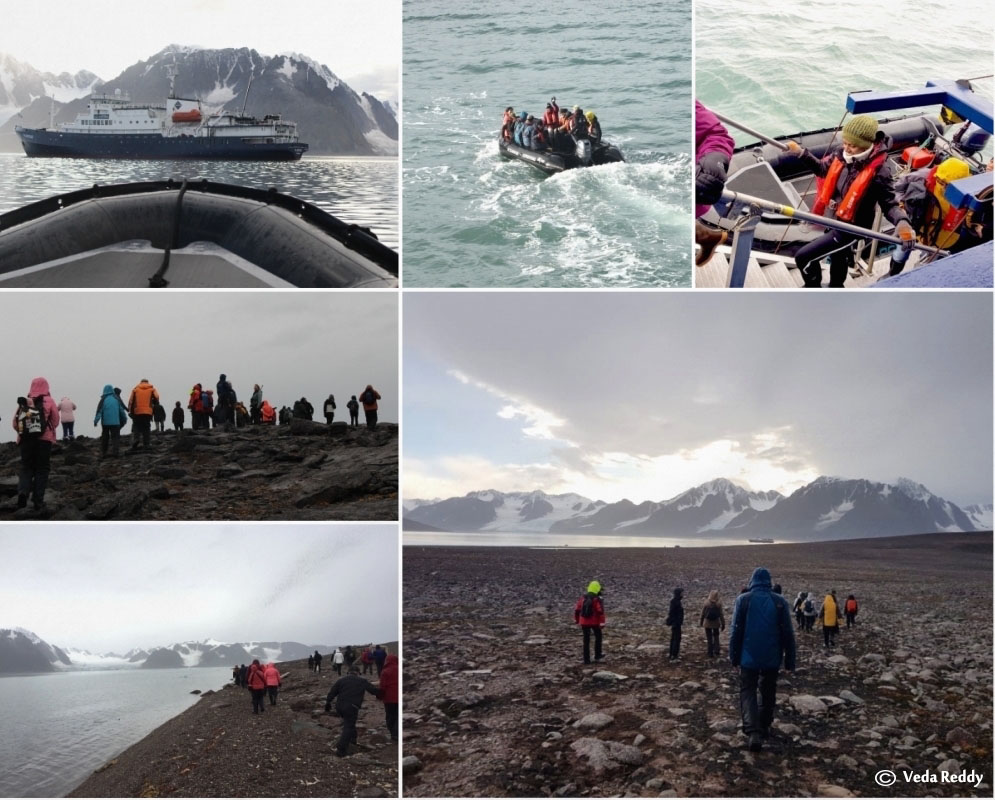 Day 3 - Monacobreen and hiking at Bockfjorden

We sailed towards the glacier front of Monacobreen. Our Captain took Plancius closer to the impressive wall of ice so we could enjoy the spectacular views of the hues ranging from deep blue to white.

After lunch, we found ourselves in Bockfjorden. We went in zodiacs to a bouldery beach and hiked here appreciating the last flowers of the season and colorful lichens. The terrain proved challenging in parts, but I enjoyed being out and about. 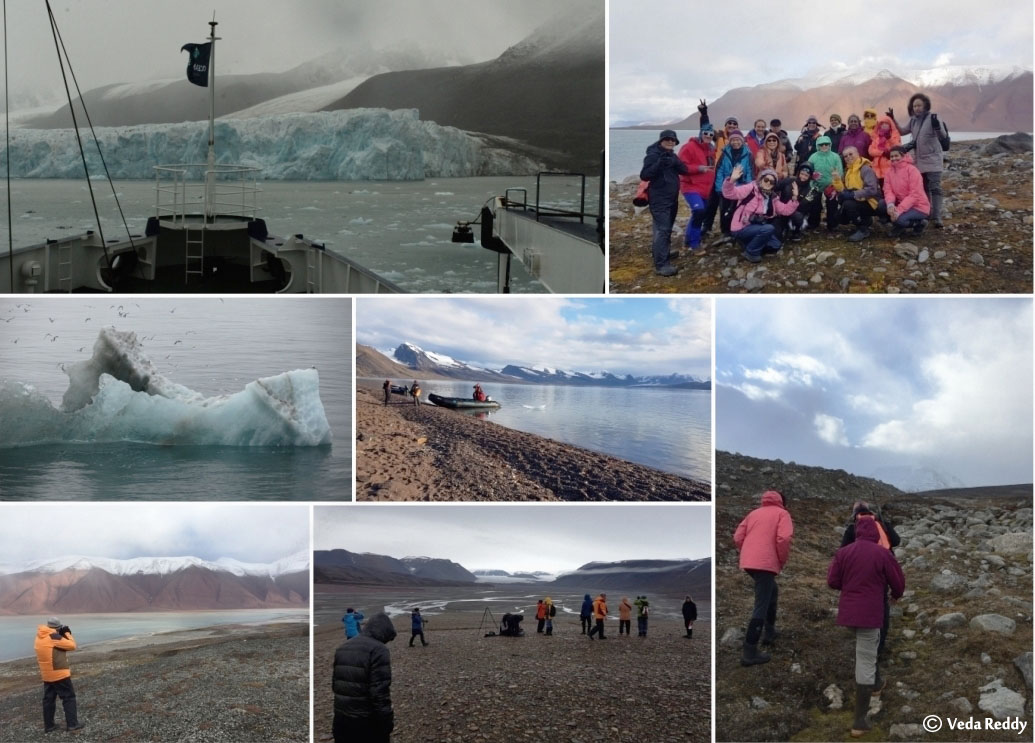 We arrived at Torellneset, a pebble beach where walruses often haul out to rest. The plan was to land and view the walrus a little closer. The staff went ashore to scout and spotted a polar bear walking on the beach towards the walrus. The guides quickly returned and our expedition leader decided to abort all shore operations for safety reasons.

However, we weren’t disappointed since we then sailed near the shoreline, to sight the bear and take good photos. Meanwhile, a group of over 30 unconcerned walruses rested along the beach and a few even swam in the water.

Around 2pm we arrived along a large cliff known as Alkefjellet. The blackish dolerite pillars of rock were almost fully covered by thousands of Brunnich’s Guillemots and Kittiwake Gulls nesting here. We were lucky to spot two Arctic foxes as well. 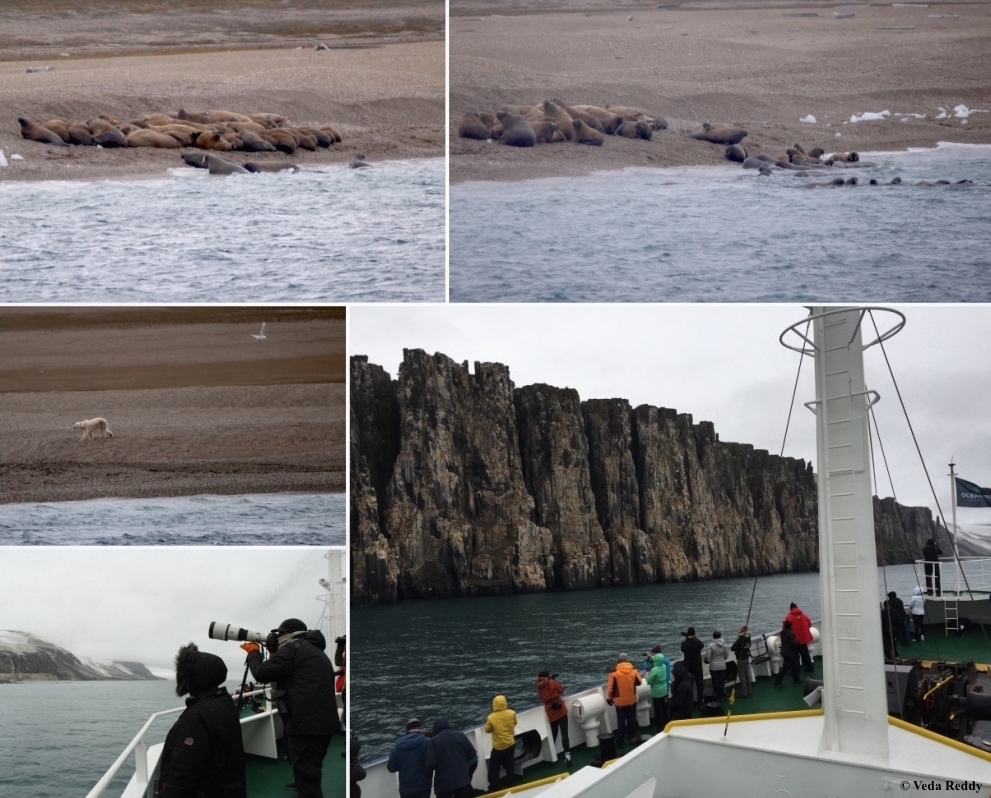 We sailed further north through the night, directly towards the heart of the Arctic Ocean. Plancius had made a lot of progress, and by breakfast time we were approaching 82°N. We encountered our first proper pack ice and the Captain was slowly navigating through narrow leads between the floes(sheet of floating ice). We had now entered a new world!

Just 30 minutes into ice we encountered our first polar bear of the day, a young male resting over a block of ice. As the ship approached we all gathered out on the deck, careful not to make a sound. The bear was curious about our presence and came over to investigate the ship, very intrigued by the strong-smelling foreign object in his environment. 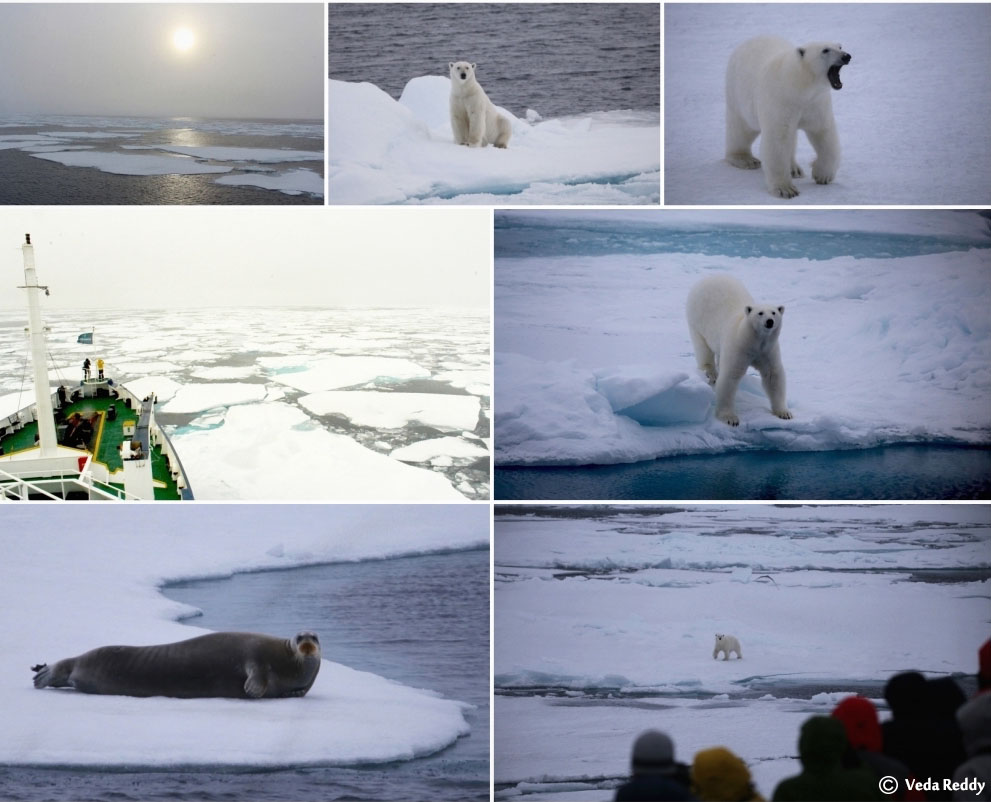 We headed deeper into the ice and continued our look out. Later in the afternoon, we came across two more bears, a beautiful mother with her year old cub. The bears were very relaxed in our presence and approached us with some interest. We spent a wonderful half an hour in the company of these majestic creatures before heading off again. Having had two amazing bear encounters, we turned, making our way to the latitude of 82°46.59’ N, a record for our Captain and the ship Plancius, and for most of the staff and crew too!

As we were feasting and celebrating over some barbecue and mulled wine amidst the pack ice on the Arctic Ocean, our expedition leader announced that she had spotted one more bear! This time it was a young female who was extremely interested in the ship. She came gamboling across the ice right to us, within just 10 metres from the bow whilst we observed her from above. An incredible experience to round off an amazing day. 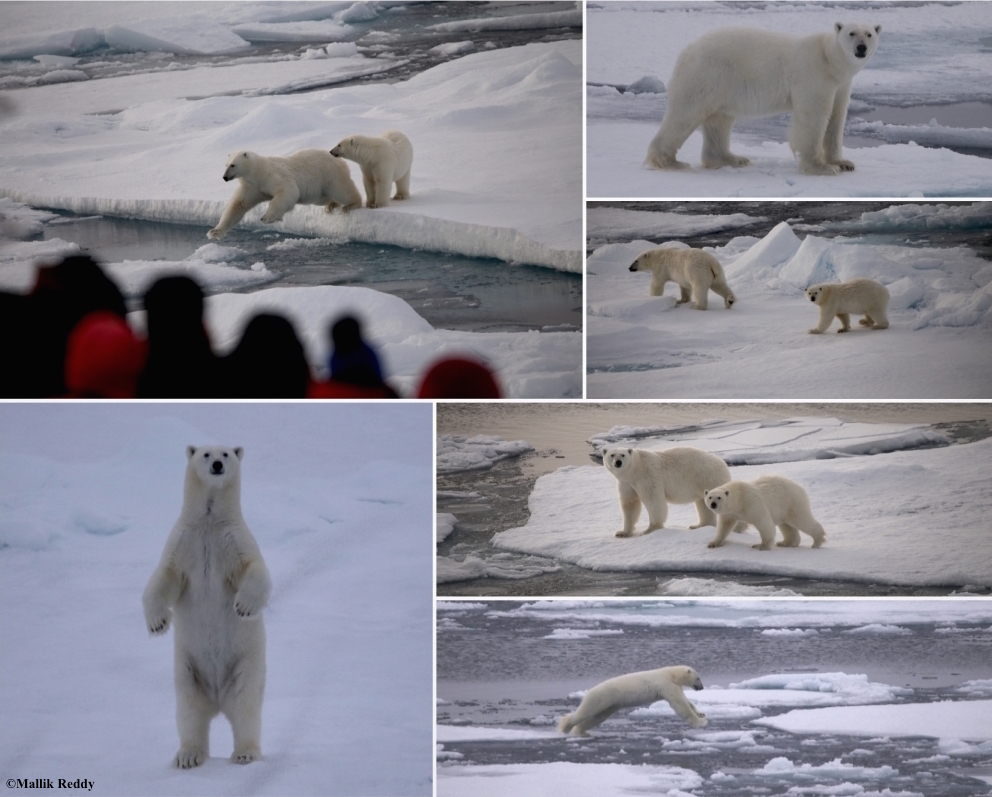 Today was spent more or less at sea, due to the distance back from the ice to Svalbard mainland. We were heading back to the Smeerenburg area to view the magnificent Smeerenburg glacier by zodiac. After an hour of zodiac cruising through the ice, we returned to Plancius. A cup of tea and a delicious hot dinner soon made us forget the slightly frozen fingers and toes. 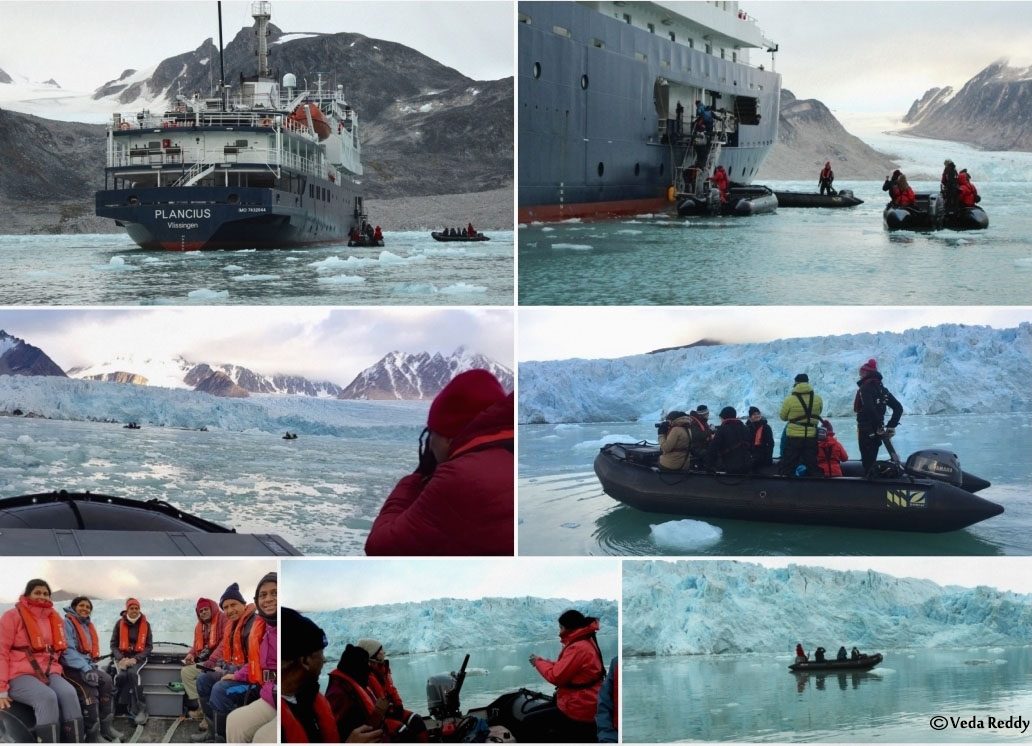 Day 7 - A day with Walruses and Reindeers

This morning, we arrived at Poolepynten, known for walruses. We were divided into three different landing groups to allow everyone equal viewing time. To add to the morning’s activities, we chanced upon a passing Sisselman search and rescue helicopter making a test drill on our ship.

We also went on an afternoon excursion to Alkhornet. This is a jewel of Spitsbergen landing sites, with bird colonies on the cliffs above, reindeer grazing the green tundra below and beautiful vistas across the bay.

We came back to the ship for a final toast to the voyage with the Captain and expedition staff. 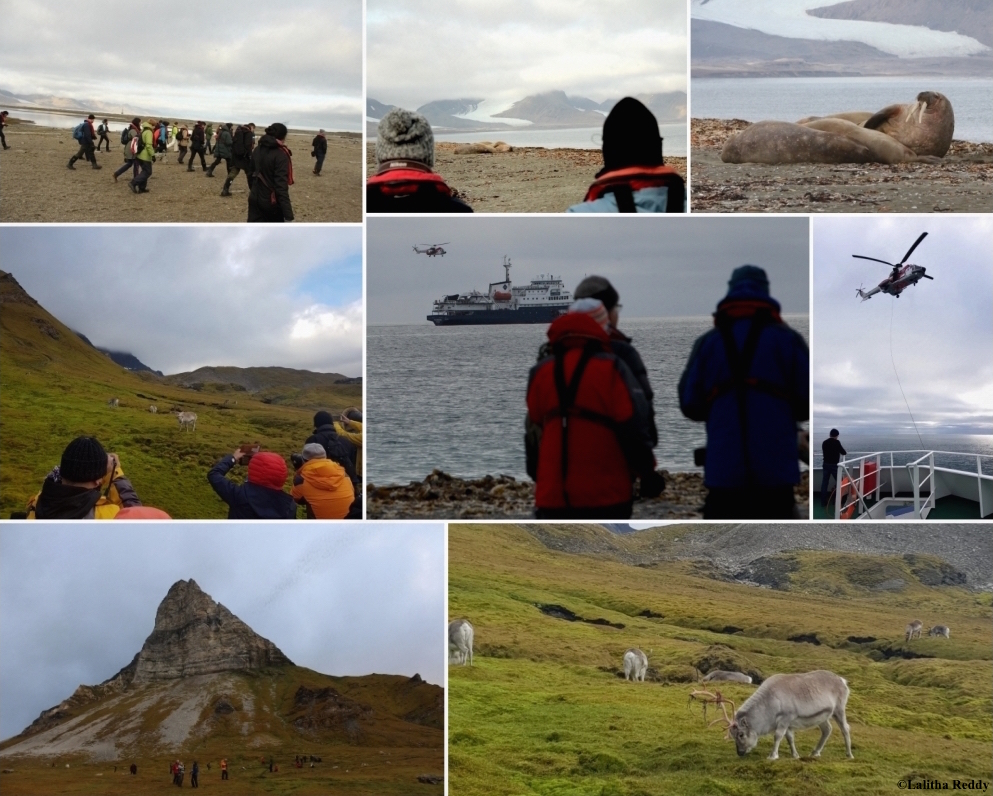 After 8 days, we were back in civilisation and transferred to Longyearbyen airport to catch our flight to Oslo.

It was incredibly novel to travel to the top of the world and realise that whichever direction you turn, you’re facing south! I had great experiences, took thousands of pictures and made new friends. This trip will last a lifetime!

Want to visit the North or South Pole? With our combined years of knowledge and experience we’ll ensure you have the perfect journey to the extreme ends of Earth. Please contact our travel experts at travel@planetwildlife.com for more information.