I visited Kanha National Park this April, along with family, for a tiger safari of a lifetime. Here’s my experience.

My family and I arrived at Kanha Earth Lodge on a pleasant Wednesday afternoon and started the action with a short picnic by the riverside. Chinmay, our guide, drove us to a spot where we were greeted by the sight of the picnic arranged on a sand bank in the middle of the river! The river was shallow enough to be crossed on foot but it was flowing and deep enough for fish life which made it a good spot to bird watch.

As we took our seats we spotted our first bird, a lesser cormorant, sitting calmly on a bent branch of a tree basking in the setting sun, maybe even settling in for the night. We watched as a little ringed plover sped about near the bank, with a cup of hot tea in our hands. Chinmay regaled us with tales of his experiences—snake wrangling, birdcalls and trips to the reserve. The highlight of the enjoyable evening was learning of two birds with unique calls—the notable and loud common hawk-cuckoo whose piercing cries kept resounding as “Brain Fever” which could continue calling well into the night, and come close to giving one a Brain Fever. The second was the Indian cuckoo whose call we first heard as we headed back from the picnic; almost melodic notes that sounded like “One More Bottle”, which we joked wouldn’t be too out of place in any pub or nightclub. We also saw cattle egrets and a very vain drongo that allowed us to photograph it at length.

Later, we somehow ended up discussing spiders and insects found in the area, probably because of my brother’s fear of creepy crawlies. Chinmay showed us a funnel spider’s nest and a weaver ant colony. We learned that the locals collect the ants to make a very tasty pickle.

On our second day, we were up early at 4.30am for our first safari into Kanha National Park at 5.45am. It was a chilly 25-minute drive, in an open safari jeep, to the Park entrance. Along with Chinmay, a guide from the Park accompanied us on each safari. 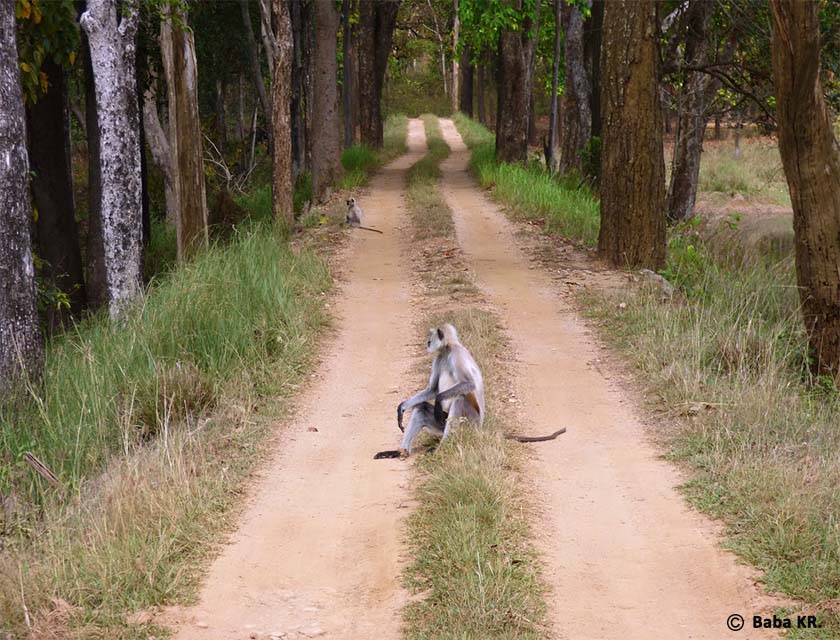 We entered Kanha to see mist hanging over the forest area in the distance. Our first wildlife sighting in Kanha was a troop of langurs, followed by a pair of jackals that passed by right next to our jeep! We moved on to stop at a small waterhole and in a fortuitous moment, we were waiting no more than five minutes and a tiger walked through the bushes in the distance, a female marking her territory!

Happy with the sighting we drove on hopeful to see more. We then spotted a serpent eagle, a bull gaur grazing by the roadside and a raptor called a shikra with breakfast clutched in its talons. We had breakfast under a black ibis’ nest, while some peacocks and peahens walked by, and a solitary Indian roller searched for some grub nearby. As the drive continued, we constantly saw spotted deer herds, occasionally sambar deer, and once a solitary wild boar. As the sun began bringing on the heat and it neared 11:30, we headed back to the lodge.

After some rest and a scrumptious lunch, it was time for our evening safari between 4 and 6pm. In contrast to the morning chill that woke us up like a bucket of cold water, the afternoon in the park, while not too hot, was still pleasant enough to put us in a lull. As we moved into the slightly hilly area of Kanha, Chinmay spotted a rare sight of a four-horned antelope. Soon after that, we came across five jeeps lined together with everyone looking in one direction. Instantly we knew they had spotted a tiger! We joined them to see an 11-year-old male sitting near a water hole. The big tiger, which had patterns resembling “CAT” striped on its forehead, soon got up and walked out of the bush. His flank was covered in water and mud and as he walked right at us, the jeeps flew into action, trying to reposition themselves, because the tiger was looking for a way across and they were in the way. Our own jeep, which was nearest to the big cat, was reversed in a swerve as the tiger walked just a foot away from us! 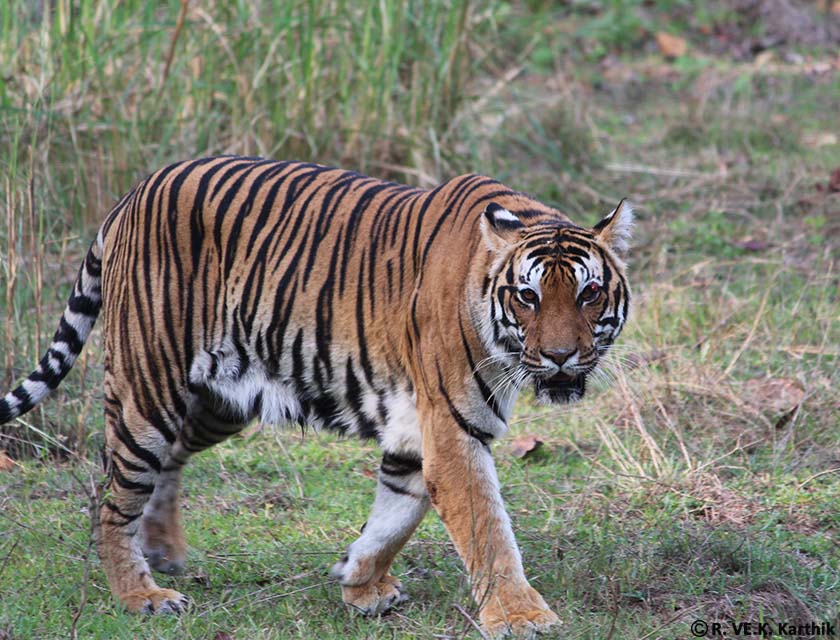 After winding down from that excitement, we drove on and spotted a crested eagle and some green bee-eaters. We spotted a solitary Indian dhole or Indian wild dog, which is a rarity as the only pack in the Park is found in an area inaccessible to tourists. A black-winged kite was our final send off from the Park for the evening and as we drove back, we spotted something slithering by on the dirt road and Chinmay being a snake enthusiast stopped the jeep and jumped off to grab it and revealed it to be a wolf snake, a non-venomous but temperamental snake.

Our third day started at 4:30am again as we groggily dragged ourselves out of bed to get ready. At the Park, the forest guide told us that one of the park stations had just spotted a tiger so Chinmay decided to show us that area.

En route, the experienced forest guide spotted something tucked away in a broken, dead tree. It was scops owl resting, and it was definitely a hard spot as it took the rest of us nearly five minutes to figure out the contours of the owl from the tree. We drove past what looked like a salt pit where the animals gather to gain salt for nourishment. Mostly sambar deer were present in the pit grazing or licking the rocks while a stork-beaked kingfisher was perched on a dead tree nearby. Moving on we stopped to give way to a peacock that regally crossed the road. As we approached a deeper forested area, we stopped as at a prime location for spotting tigers, besides a number of other jeeps. One of them had heard a warning call. While waiting we saw elephants and their mahouts. We were suddenly jolted to attention as a loud roar emanated from the bush. Chinmay and the guide claimed that the tiger must have mock charged the elephants. We impatiently waited for another half an hour, without the tiger making an appearance, before we moved on to see a jungle owlet, the only species of owl that is active during the day. We then spotted a serpent eagle, a few herds of spotted deer, troops of langurs and an Indian roller preening its feathers before heading back to Kanha Earth Lodge, crest fallen for not having sighted the tiger again.

As we headed out again for an evening safari, we were not very confident of spotting a tiger again as none of our fellow guests had any luck either. We were greeted once again by sambar deer, spotted deer and langurs. Birds sighted included peacocks, egrets, cormorants, drongos and serpent eagles. In the grassland, we were given a rare sight of white-ruffed vultures roosting on a white dead tree, possibly feasting on a dead animal. As it got closer to the checkout time, we went through a corridor with bamboo hunching over one side and trees and shrubbery on the other. It was here that we spotted a number of jeeps gathered and all looking in one direction. Someone had spotted a tiger sleeping in the shrubbery, less than 3 meters from the road. It was extremely hard to see the tiger in all that plant life, that too with fading light. As the Park was closing, we had to quickly leave the place. Nearing the Lodge we spotted a jungle cat prowling for prey, our final sighting of the day. We then feasted on an excellent dinner before turning in for the night.

The next day we were in two minds about going on the morning safari as we were leaving later in the day. However, my mother convinced us to come along as she loved the beautiful scenic grasslands of Kanha National Park. 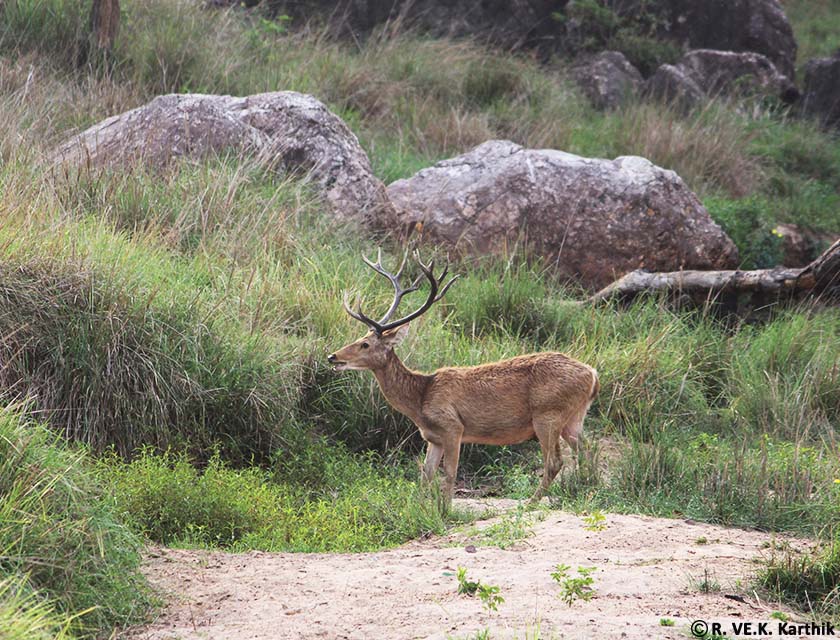 We drove into an S-shaped curve where we spotted, for the first time, the highlight of Kanha, the swamp deer or “Barasingha” meaning “twelve horned one”. We also saw a white-ruffed vulture here. We drove ahead just in time to spot a tiger! As it disappeared into the bush we rushed to another spot where it would possibly come out. As we waited, we watched a peacock perched atop a dead tree. Suddenly, it moved to a higher position as if it had seen something we hadn’t. We were proven right as the peacock quickly spread its wings and took off just as the tiger broke through the bush! The female tiger walked calmly, completely ignoring the jeeps present. As she approached the road, she looked directly at our jeep and crossed right in front of us and back into the bushes. Chinmay and the forest guide’s expert skills resulted in this experience. What a majestic sight!

After that wonderful excitement, we drove leisurely through the central Park area and spotted more swamp deer herds. We also saw a fenced off area meant for a swamp deer breeding programme initiated by the Forest Department. The programme was such a success that Kanha managed to introduce swamp deer in other national parks as well. The area is now being used to increase the numbers of black buck antelopes. In another area, the Forest Department was cultivating elephant grass, which had vanished from here. Our safari ended with a black wing kite spotting and some excitement over seeing a leopard paw print, unfortunately, a thorough search yielded no leopard sightings. 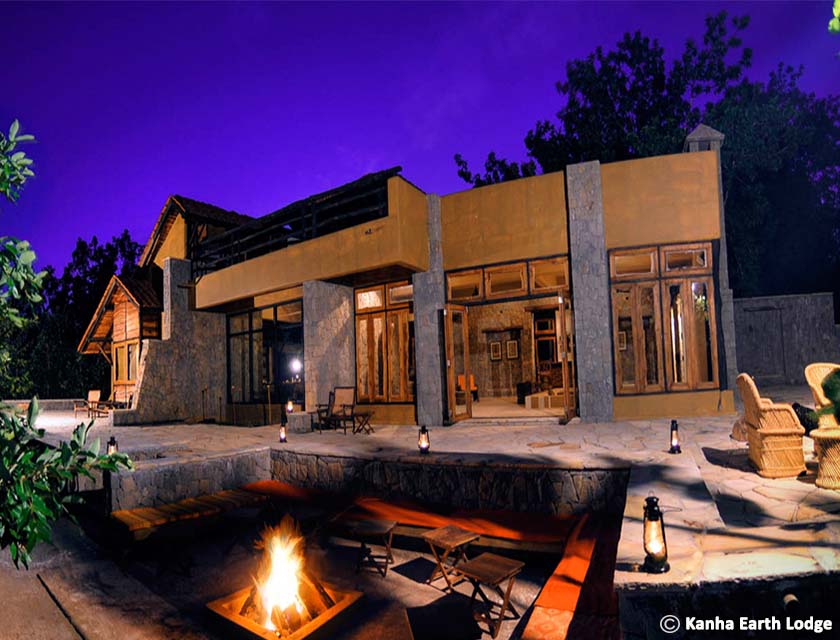 Back at Kanha Earth Lodge, we enjoyed a scrumptious breakfast and departed carrying with us nothing but good memories and experiences. We promised to return soon to see the tiger again and hopefully the elusive sloth bear and leopard as well.

Kanha Earth Lodge went that extra mile to ensure we had an excellent stay. A big Thank You to Planetwildlife for meticulously organising this magnificent trip for us.