We had an amazing trip to Kenya in August 2015. We went to see the Great Migration, where 2.5 million wild animals move across Serengeti. While animals in savannah migrate all the time, July and August are the best times to watch as the animals are all in one place to cross the river.

The interesting part is that Great Migration restarted only in1960. In early 1900s, Rinderpest attacked cattle including wildebeest and reduced their numbers to a few ten thousand from 2 million individuals. As there were such few wildebeest, they had all the food they needed and did not migrate. In 1960s, when Rinderpest was eradicated, the numbers gradually went to 1.3 million, the amazing and spectacular great migration started again.

As I was leaving I was very excited about seeing lions for the first time ever and I was also excited about crossing the equator. I was so excited that I packed my camera and binoculars and started to dance. 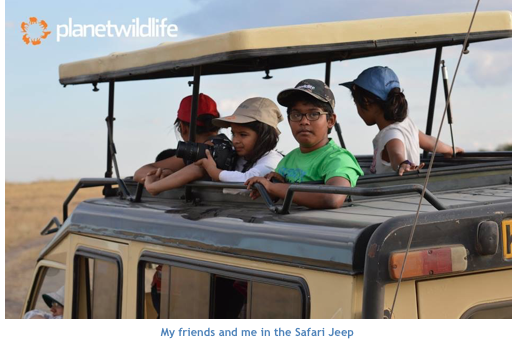 We left home at about 9:30 even though our flight was only at 11:40 because we got news that there would be a lot of security on Independence Day and it would take us hours to get to the airport. Guess what, we reached the airport within 15 minutes. We spent about an hour in the duty free shop. Our group consisted of me, my mom, dad, and my friends’ family. We reached the airport and checked into Jet airways to go to Mumbai. In Mumbai international terminal, we checked into Kenya airways B787 dream liner. We reached Nairobi in 5 h 30 minutes. About 4 hours into the flight we crossed the equator line which made me so excited, that I, by mistake pressed the play from start button on my movie.

We woke up and had a sumptuous breakfast at the hotel. We left for Lake Nakuru. About 2 hours into the drive we stopped for a boat ride on Lake Naivasha, which was 145 km2. Just to give an idea, this is as big as 20000 football fields. This is where we saw our first giraffes, water buck and Zebra. We also saw a lot of birds – cormorants, pelicans, egrets, African fish eagles, herons.

After that we continued our drive till Lake Nakuru and checked into Lake Nakuru Lodge. As we were running late for the game drive, we quickly had lunch and relaxed in the room for half an hour. That is when we started our first game drive in Africa. The first thing that we saw was a large herd of zebra grazing. This was our first herd of zebra! The zebra were startled by the noise of our jeep so we had to drive away quickly. Next we saw a couple of black rhinos. This was a very lucky sighting because there are only 540 black rhinos in the African bush left. The rhinos had two horns which were pure white in colour.

Our next sighting was the king of the jungle, the lion. I was so excited that you could see it in my face but could hear no sound from my mouth. We saw two lions, both male. We were told by our guides that they were thrown out of the pride. After that we saw four white rhinos near the lake. The lake is only 45 km2 (about 6500 football fields). Lake Victoria, the largest in Africa, is 68,800 km2. Imagine the difference! Let me introduce Eric and Charles. Eric and Charles were our driver guides. Eric was from a village near Masai Mara and Charles was from a tribe Samburu and came from a village near equator. They were extremely knowledgeable and had amazingly sharp eye sight. To keep you interested, here are some tidbits:

Some words in Swahili 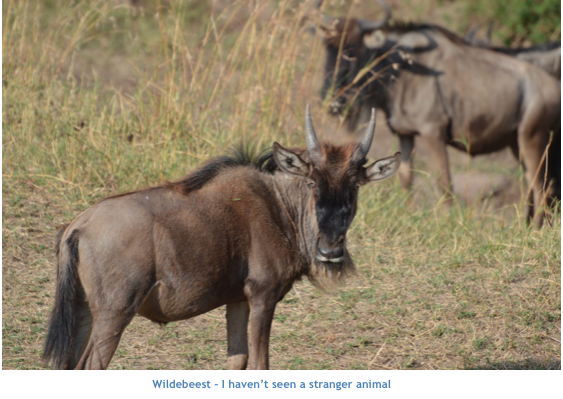 We started to drive towards Maasai Mara after a delicious breakfast in the Lake Nakuru lodge. On the way we had a lot of washroom breaks in tiny gift shops. There was something interesting on the drive-every single toilet in those gift shops was neat and clean. The last break was eighty kilometres from the camp. The rest of the road was funnily referred to as the great African massage because it is 80 km of dirt road, bumpy and badly made. That did not stop the vehicles. They kept on going at 80 km/h! It was only once we entered the reserve that we started seeing animals like zebras, wildebeest and giraffes. The wildebeest is a very funny looking animal. It has a mane, a beard and very funny looking pair of horns. Once we reached our camp (late as usual) we had lunch and checked in. We got tents which were so large and fancy. The tents were right next to the river. We were hearing hippos grunt all day. This was in the water. Imagine what it was at night when the hippos come out to graze and fight. That evening we saw two families of cheetahs, an adult with 3 cubs and 5 adult cheetahs feeding on a wildebeest. After that we saw a couple of lions walking along playfully. Just then we saw a really huge tusker, the African bush elephant, the largest land animal living.

We left early with packed breakfast. We saw a spectacular sunrise with hundreds of hot air balloons and thousands of zebra and wildebeest, all with hills as a background. After roaming around for some time we came across 2 endless herds of wildebeest, zebra, and topi. The two herds started to gather right in front of us. They kept on gathering for 2 hours. They must have been about 150,000 to 200,000 animals gathering up. When they were crossing, 30-40 vehicles came out of the blue. They were filled with irresponsible tourists. I felt they were inconsiderate because as tourists they were blocking the movement of animals in their own home. I also saw one van driving straight into a herd of impala. As the crossing ended we saw a leopard just walk on the other edge of the river. That was the best sighting in Africa for us. That day, finally we had completed the BIG 5! The elephant, the rhino, the buffalo, the lion and the leopard are called the big 5 and are must see if you go to Africa.  That day, I found out that all the animals work together - like the zebras used to look out carefully for all the carnivores like lions and cheetahs and of course, humans. That evening we saw a couple of lions, fully grown, majestic kings of the jungle. The lions were huge, with black manes and big teeth. 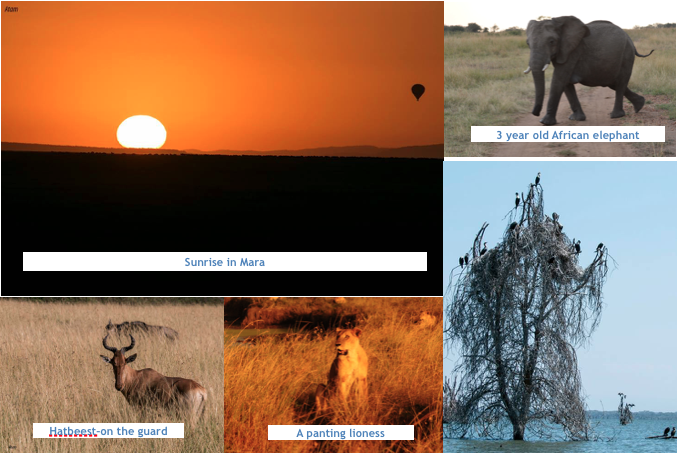 On that day we visited the Maasai village. It was an experience on its own. Their houses were so small but they still had a kitchen, a sitting area, and 2 bedrooms. The village was very small consisting of only 10 houses. The houses surrounded their cattle because Masais are pastoralists and cattle are precious to them and need to be protected from wild animals. They also had very interesting culture like different cultural dances for men and women, and holding clubs while dancing. 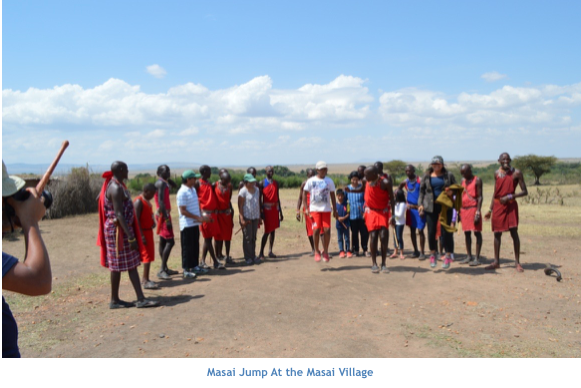 While we were driving back into the reserve, we saw a herd of impala females watching while a couple of males were fighting it out to become the big boss. This was watched intently by 8 giraffes, who thought it was a drama to be watched. It was really hilarious. Again in the evening that day we saw 10 lions. One was coming right towards me! It was a really exciting experience!! That evening, we didn’t see anything else, so we came back to the camp.

That morning, as soon as we left the camp, we saw 8 lionesses up close without a crowd of jeeps. We also saw the river crossing with no crowd of jeeps!!!! We also saw a big herd of mother and calf tuskers!!! It was as if the animals all came to say bye!! That evening we saw a cheetah which was marking its territory and calling its family while the Thompsons gazelles were facing it saying “we’ve seen you so don’t go trying to catch us”. It was really funny as even the  wildebeest started to do that. Again this was comical. Later we saw the cheetah’s family as we drove along.  All that time, my father was in another jeep, waiting at the river bank for the river crossing to happen. That was our last game drive of the trip. I was feeling morose because the trip was over in such a short time. We had dinner and slept at the hotel.

We drove back to Nairobi that day to catch our flights. We had a booking for dinner at carnivore restaurant so we stopped by. I will never forget that meat! It was cooked to perfection- every single one of the fifteen meats they gave. I was the only one who took everything they gave. In the shop outside we took a couple of tee-shirts, one which said carnivore in bold and one which had a lot of Swahili words with their meanings. Later that day we drove to the airport where we met many people of my family. 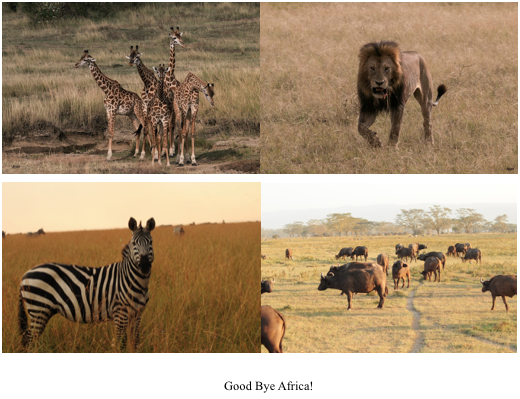 We had a wonderful trip to Kenya, the best animal viewing in Africa. I wanted to tell you all about the actual Mara. The masai mara has everything. The circle of life and the food chain which specially exists in masai mara and other parts of east Africa. In the Mara, nothing goes waste. Like the lion kills an animal, eats its fill, and leaves. Then the scavengers like hyenas, vultures, marabou storks, etc clear up the rest. After the scavengers, the insects, worms and microbes complete the remains to make manure. Even the potty is not wasted. The tortoises eat the potty of hyena, which is their source of calcium.

If you’d like to experience Africa with us, write to our Africa travel expert at parveez@planetwildlife.com !