​On the invitation from a close friend, who is the CEO of an Insurance company in Daressallam(DAR), I decided to fly to Tanzania - adding vacation time to a business trip. 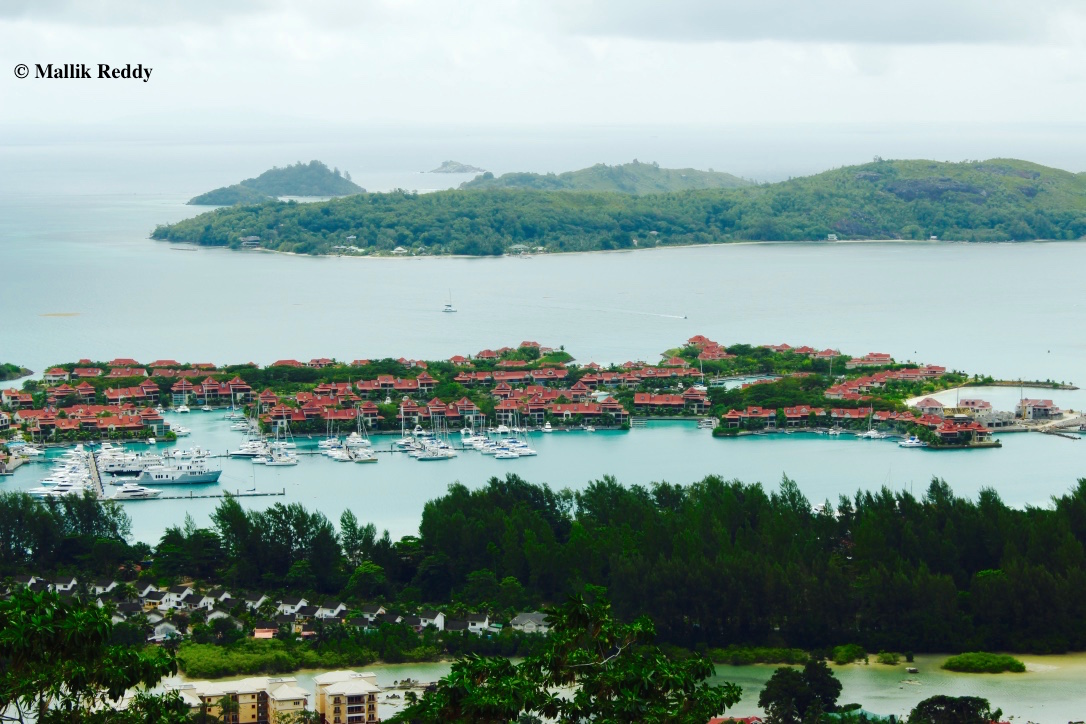 Day 1 - Because I was flying Air Seychelles (Mumbai to DAR), I had the opportunity to stopover for a day in Seychelles. As I landed, I could see small islands scattered around the Indian ocean. I landed in Mahe Island (Victoria), the immigration was a breeze and I was driven to my Guesthouse accommodation in no time. First impression of the country was of utter fascination at the cleanliness and sheer scenic beauty.  Post breakfast, I rented a car and decided to drive around the biggest island (Mahe) of Seychelles. The drive from the south of Mahe to Victoria (capital of Seychelles) was scenic with the Indian ocean on your right. Roads were well paved but one has to be careful in these narrow roads and the incoming vehicles. I had stopped at number of tantalizing turquoise beach places. Victoria is a small town which can be driven in and out in a few minutes. The multicultural and multiethnic inhabitants bring wide variety of color, cuisine and creativity to the country. Most of the people are mixed race - African, French, Indian and others - with most of them speaking Creole (local language) followed by French and English. My drive ended with a early dinner at a local restaurant serving Creole food, mainly comprising rice and fish curry.

Day 2 - I landed in DAR in the early afternoon and one could not avoid the difference in immigration and customs clearance between Tanzania and Seychelles. With a bit of luck, I came out of arrivals to my waiting driver. The rest of the day was spent on meetings.

Day 3 - After my morning business meetings, my friend insisted that I squeeze in a quick trip to Zanzibar. I boarded the “Kilimajaro’ fast ferry of Azam Ferry Company that took me 90 minutes from DAR to Zanzibar. The VIP Class in this sophisticated catamaran ferry was very comfortable. At 3pm, I set foot in Zanzibar, also known as Unguja, where a giant sign board “Karibu Zanzibar” welcomed all of us. I decided to walk to my hotel “Tembo Hotel”, located right across the beach. The half kilometer walk by itself gives you a bit of history of Zanzibar. The heritage buildings are everywhere reflecting European and south Indian architectures. Tembo Hotel is a heritage building that housed the United States Consulate in the past. This unique hotel has various types of rooms with antic furnitures making it worthwhile to stay despite other options elsewhere in Zanzibar. Though Tembo Hotel doesn't boast of any frills like the 5 stars, it has the old world charm and the best location in stone town.

I decided to hire an English speaking guide for the walking tour of Stone Town, also known as Mji Mkongwe in Swahili. Stone Town reflects the Swahili culture and the influence of Arab, Persian, Indian and European elements of architecture. Some of the old heritage buildings are now converted into five star hotels. Stone town is rightly designated as United Nations World Heritage Site in the year 2000. Returned to the hotel around 7.p.m after the heritage walk. 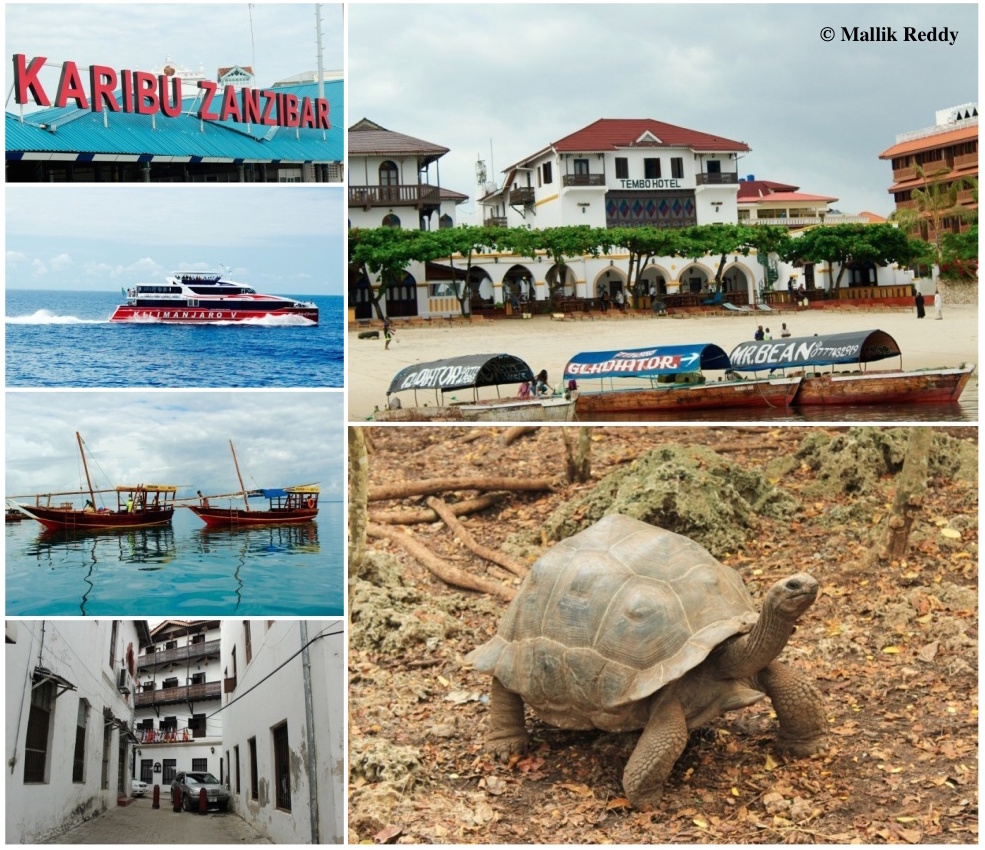 Day 4 - After breakfast, I decided to hire a boat at the beach across Tembo Hotel to Prison Island, which can be seen from Zanzibar and it takes 40 mins by a small motorised boat. Off I sailed on the clear blue sea to prison island. The island is also called Changuu Island or Prison Island, is a small island about 2 sq km in size. The island was used as a prison erring slaves in second half of 19th century. It was also a coral mine. One of the main attraction of this island is the sizable numbers of Aldabra Giant Tortoises. It was heartening to see these endangered species being taken care of and being multiplied. These tortoises are very friendly interacting with tourists and also one gets the opportunity to feed them. The age range of these endearing animals is between months old to 150 years old. The visit ended with spending sometime on the beach thats full of marine life especially star fish. Snorkeling and other underwater activities can be done at Prison Island’s neighboring island

I headed back to Zanzibar for late lunch and then boarded the ferry back to DAR. Having completed my business meetings already, I was looking forward to my road trip to Selous Game Reserve early next day.

Day 5 - My friend had arranged a trip for both of us to Selous Game Reserve. We were on the safari vehicle at 7.a.m driving to Selous that took us to our lodge, Selous Riverside Camp, located adjacent to the mighty Rufiji river and just couple of kilometers away from the Mtemere Gate. The lodge has 10 luxurious & enchanting eco-friendly tents, couple of which have attached plunge pools. Also, the camp has its motorised boats to take the residents on river safaris. Selous Game Reserve is one of the biggest national parks in the World and is declared as a UNESCO World heritage site. It’s approximately 54,000 sq kms in area, and unfortunately 90% of it is only open to game hunting and 10% for tourism. Diverse wildlife and beautiful landscapes with Rufiji river flowing alongside make Selous very attractive and unavoidable.

We were received by the friendly staff and guided to our respective tents. The tented accommodation is good if not luxurious and ensuite facilities are great. The Masai watchmen were attentive and were always there at hand to help us reach the dining area. The staff informed us of the river safari at 4pm and accordingly we reported on time. Variety of birdlife across the river banks, nile crocodiles, hippos, tempted me to shoot lots of photos. The two and half hour safari was exciting and relaxing especially after the 5 hours drive from DAR. After early dinner, I retired for the day thinking about the whole day safari next day. 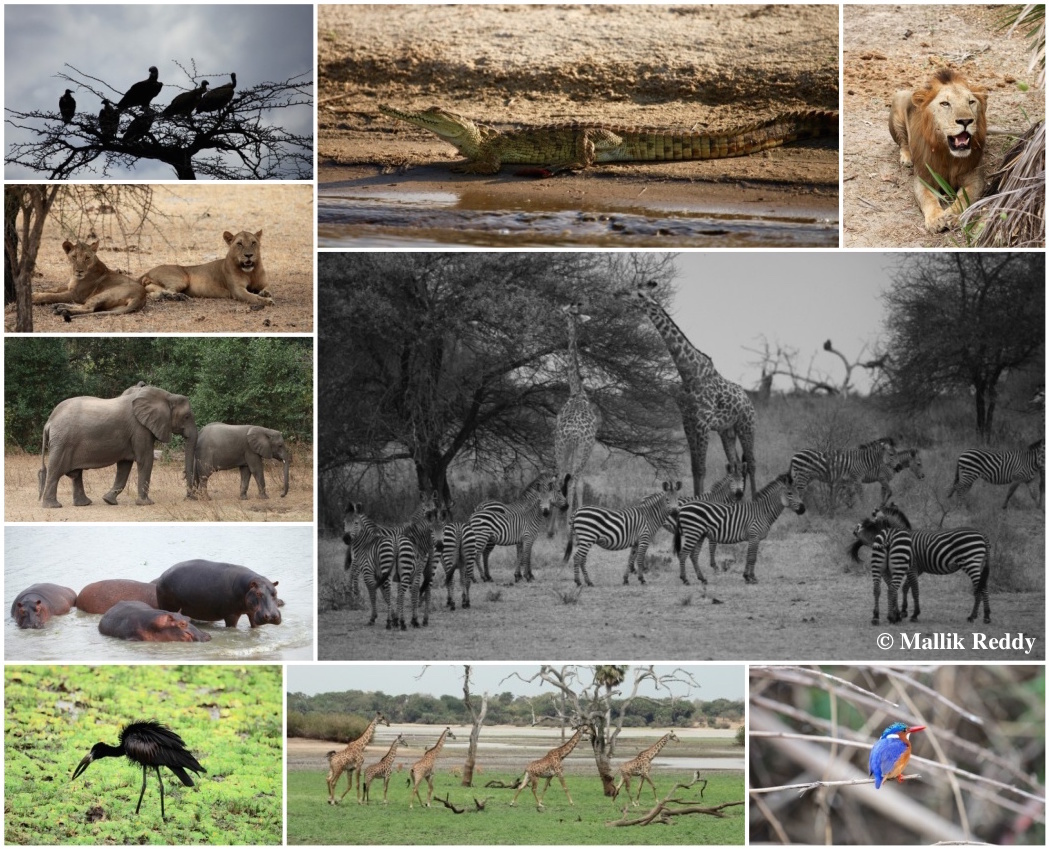 Day 6 - Early breakfast and packed lunch, we were all set for a full day safari. After the formalities at the Mtmere gate, I was awestruck at the sheer beauty of the park and its setting. The landscape and Rufiji river was a spectacular sight. Unlike Serengeti’s savannah landscape, Selous is totally different with variety of trees. Encountered two lion prides of 7 and 5; Hippos on the river edges at close quarters; elephants; giraffes; several species of birds; and not to miss the lovely & photogenic Selous zebras. I was very very eager to see wild dogs but was disappointed at not sighting them. I should confess that I have visited many parks but somehow wild dogs are alway eluding me. I hope to see them one day. The safari ended at 5pm and needless to say I had a great safari.

Day 7-  My day started early with a walking tour in the buffer zone of the reserve and village visit. After breakfast, at 11am, we were back on the road to DAR, and was ready to head home to India the next day.

Overall, my trip was eventful, educative, exciting and a bit tiring.

Email travel@planetwildlife.com for custom made tours to explore Tanzania.