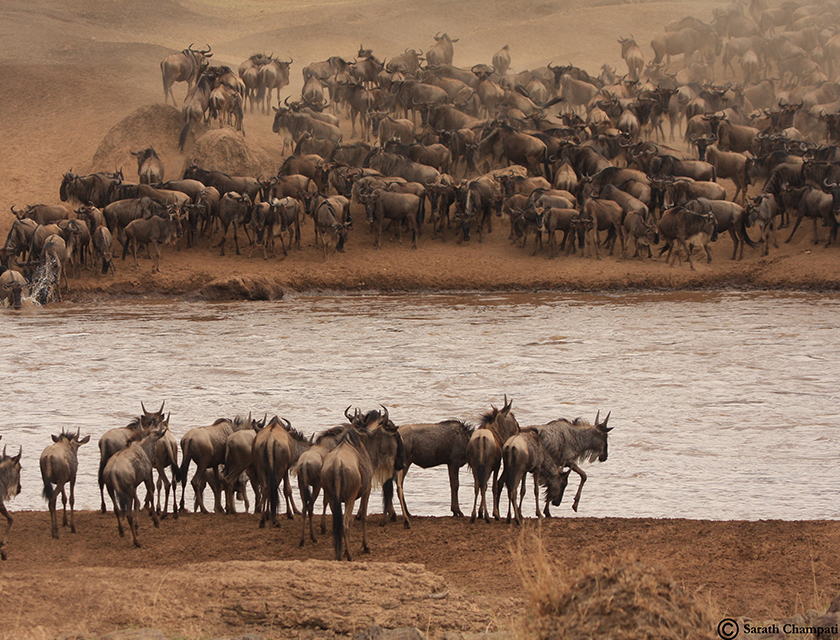 Any conversation about wildlife experiences  is incomplete without mention of the Great Migration. The annual ritual of hundreds of thousands of wildebeests, Thompson’s Gazelles and zebras surging through the Masai Mara, is an awe-inspiring phenomenon for wildlife lovers. Along with the herbivores, you can also spot the Big Five: African lion, African elephant, Cape buffalo, African leopard, and white/black rhinoceros in Masai Mara National Park. Each year, nature lovers, photographers and wildlife enthusiasts flock to the grasslands of the Mara to witness Mother nature’s greatest and most dramatic show. This addictive saga is a visual treat and will make you want to return every year. 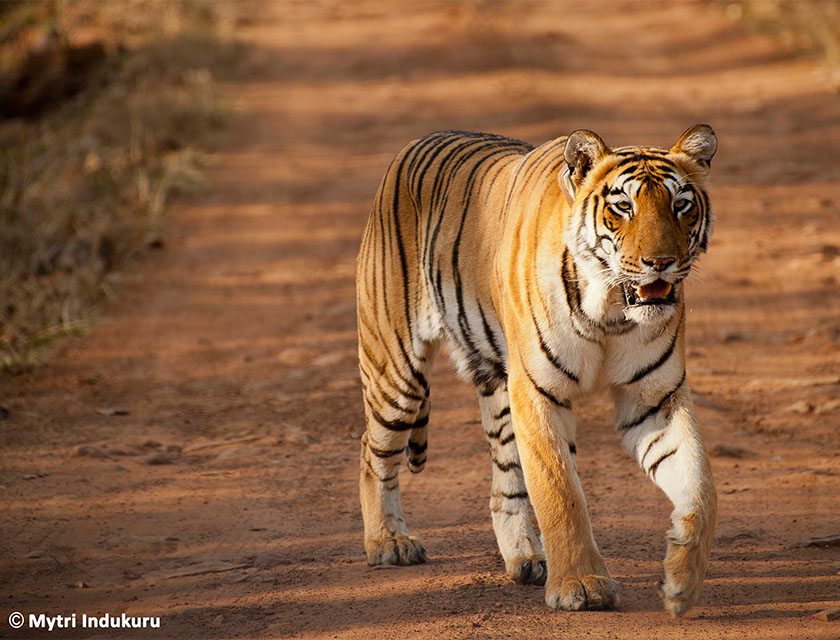 Tiger, the national animal of India, is a majestic creature. Bandhavgarh, Kanha and Ranthambore National Parks are a few of the best tiger spotting areas in India. Royally lazing about or stealthily stalking prey, tigers play the muse, setting shutterbugs off on a  clicking spree.

There were once nine subspecies of tigers: Bengal, Siberian, Indochinese, South Chinese, Sumatran, Malayan, Caspian, Javan and Bali. Of these, the last three are extinct, one is extinct in the wild, and the rest are endangered. Conservation efforts are leading to a rise in tiger populations again but progress is slow. So, spot the Royal Bengal Tiger in the wild in India and experience something remarkable soon. 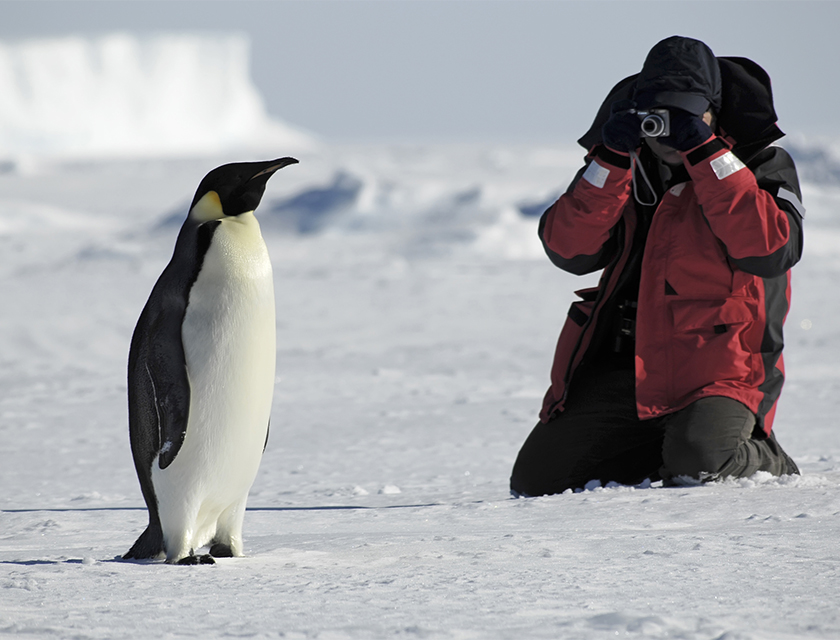 You’ll find penguins only in the Southern Hemisphere, starting as high as South Africa (Boulder’s Beach) and moving down all the way to the “White Continent”, Antarctica.  The tuxedoed bird can be seen up close in Antarctica, being generally active and playful. Watch as penguins appear bobbing their heads curiously, taking a steep jump into the frigid waters for fish or just socialising with their comrades.

You can see a total of 17 species of penguins all over Antarctica. Of these, 7 penguin species can be seen off the Antarctic Convergence, along with  45 other species of birds. Also see fur seals, crabeater seals, leopard seals, Weddell seals, peninsula fin whales, humpback whales, minke whales and killer whales among other magnificent wildlife here. 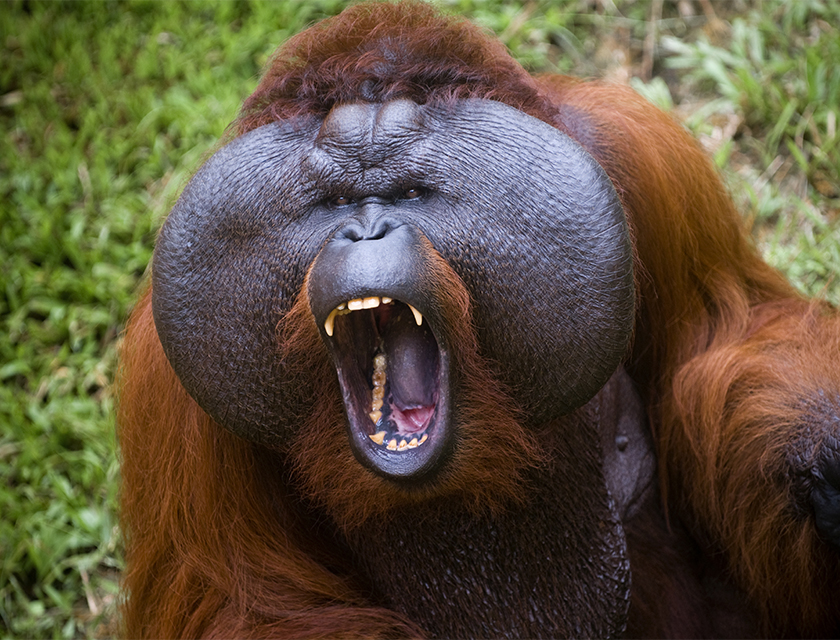 Borneo’s heart-stopping beauty is perhaps surpassed only by an orangutan sighting. Found in the wild in the Borneo and the Sumatran belt, orangutans spend most of their day walking around, swinging and climbing trees. Each fully grown skinny-looking reddish-brown adult orangutan actually has the strength of seven men! It can be a magical experience to see one in the wild. A visit to the Sepilok Orangutan Rehabilitation Centre can quench your thirst of seeing this curious creature. 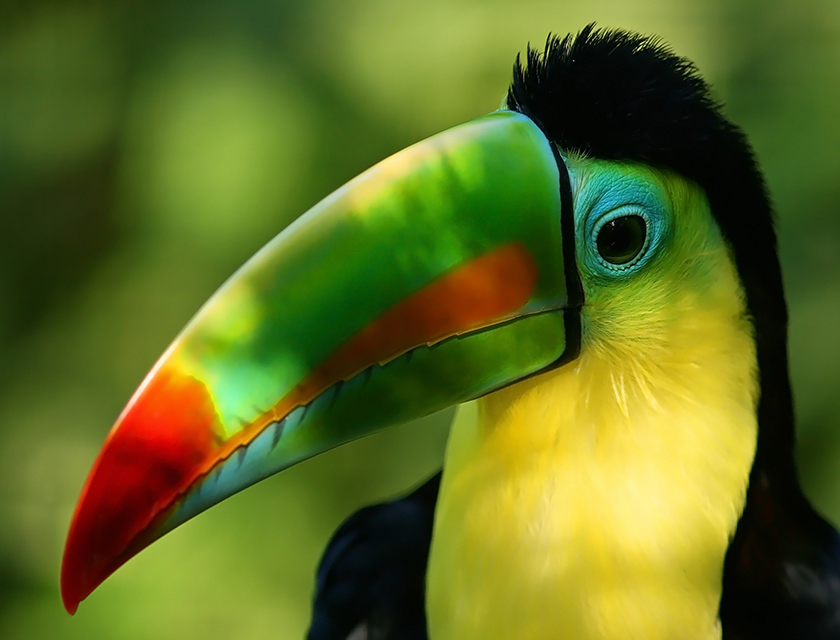 Costa Rica is a wildlife lover’s paradise. Being one of the most biodiverse places on Earth, Costa Rica offers unlimited wildlife viewings in stunning settings. For an ornithologist, this country’s wilderness is nothing short of nirvana. Costa Rica’s endless birds have inspired generations of the past. The Mayans and the Aztecs were known to worship the bewitching quetzal, a breathtakingly beautiful bird. The world’s most powerful bird of prey, the harpy eagle can be spotted here, and if you are lucky you can catch it in action doing what it does best—hunting. Other birdlife seen here includes scarlet macaws, three-wattled bell birds, parrots, toucan, herons, egrets, vultures, and laughing gulls out of a total of almost 400 species!

Gorilla tracking can be one of the most exciting wildlife experiences. Uganda and Rwanda are firmly placed on travellers’ “essential wildlife experiences” list, all thanks to their gorillas. These close relatives of humans can be tracked in their natural habitats at Bwindi Impenetrable National Park and Volcanoes National Park. Home to many endemic flora and fauna species, these two parks are as unique as it can get. Trek extensively through ancient forests and be rewarded with the sight of impressive gorillas in peace with their surroundings. 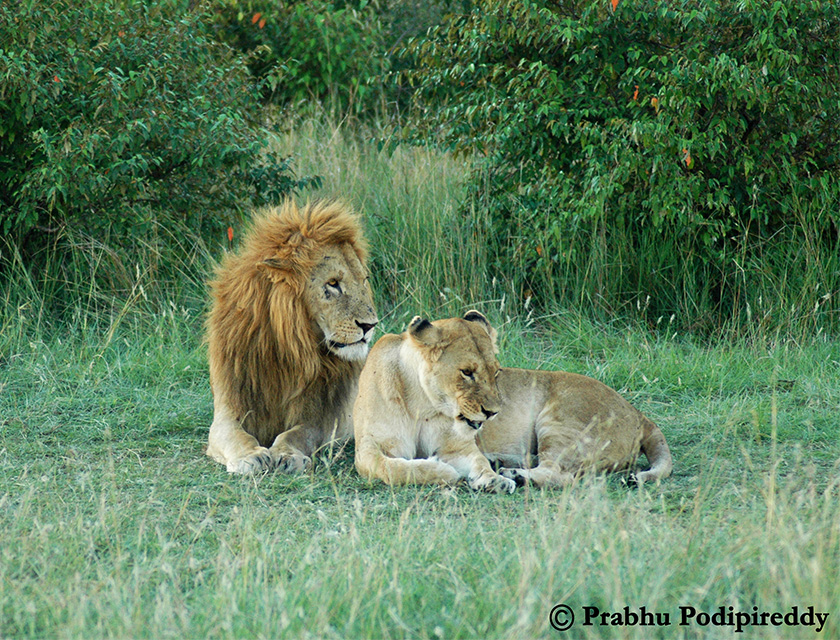 Some might say that you haven’t truly experienced wildlife till you spot the Big Five. Coming face to face with them is definitely not an overrated activity. The UNESCO World Heritage Site of Serengeti National Park in Tanzania is the serious safari-goers’ preferred destination for Big Five spotting. Summing up the pros of visiting this Eden can be quite a daunting task—the endless plains of the Serengeti, interacting with the local tribes, hot air ballooning, maybe catching up with the wildebeest migration and experiencing the authentic African world are only a miniscule part of this mighty expedition. The Serengeti is one of the Seven Natural Wonders of Africa, home to gorgeous wildlife and landscapes, and a must-visit for every wildlife lover. 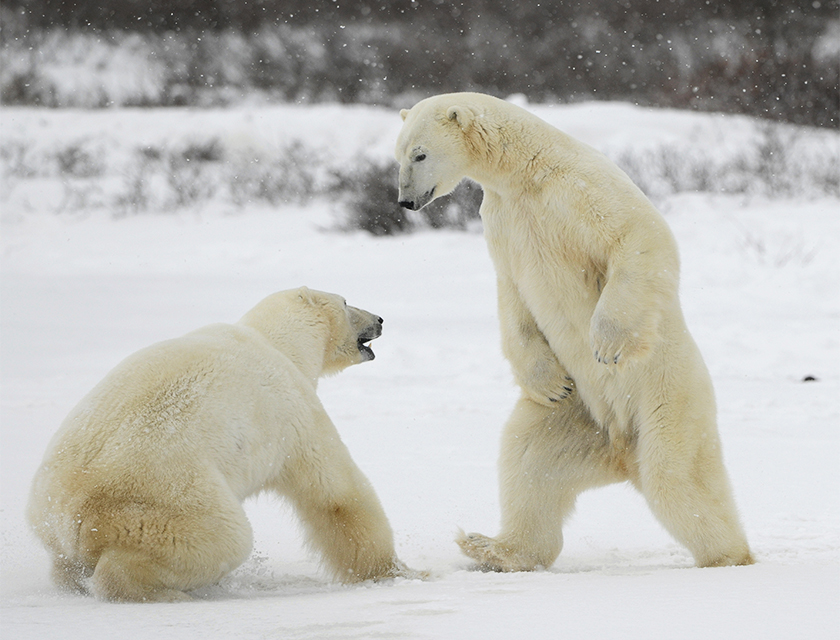 Travel to the Arctic—check. Thrilling freezing cold weather—check. Beautiful landscape of ice—check. But that’s not all, for the perfect Arctic experience, spotting polar bears is the crux. Evolved to blend in perfectly with their surroundings, polar bears in the Arctic will probably steal the spotlight of your vacation. Watch them play-fighting, hunting prey, fishing, or just lounging around, content with their environment. Also see Atlantic puffins, geese, skuas, Svalbard reindereindeer'sic foxes, belugas, kittiwakes, Brünnich’s guillemots, bearded seals, minke whales, walruses, and bowhead whales among Arctic’s varied wildlife.

Offering some spectacular views, the Arctic can be best witnessed from July to December during maximum hours of daylight (many times you’ll experience 24 hours of sunlight!). Parts of Canada, Russia, Greenland, USA, Norway, Sweden, Finland and Iceland make up the entire Arctic region, home of the polar bears. 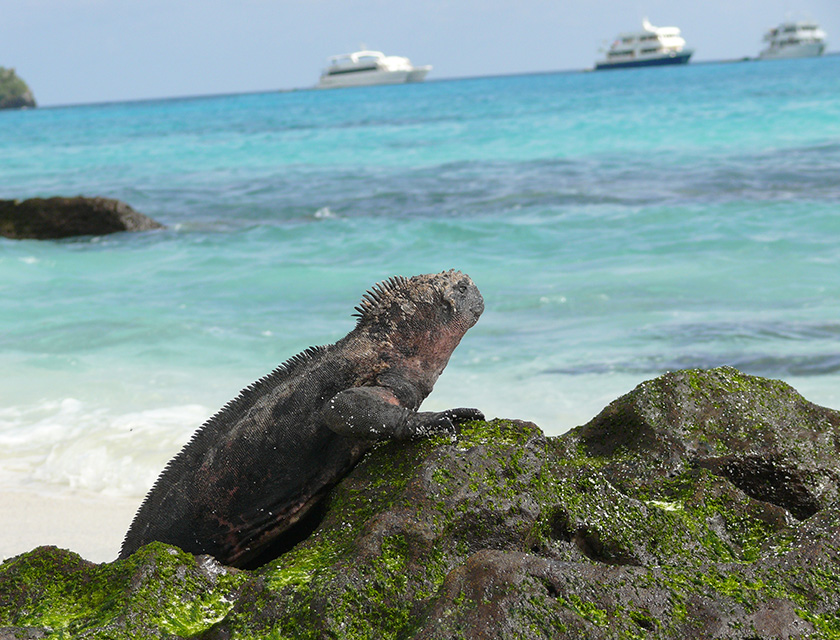 Galapagos, the land synonymous with wildlife, welcomes travellers all year round. Set off the west coast of South America, the Galapagos Islands are a UNESCO World Heritage Site where Charles Darwin famously researched his Theory of Evolution. Galapagos Islands’ wildlife bounty is represented best by the numerous endemic species of the region. This biodiversity hotspot houses the famed Galapagos tortoises, marine iguanas, blue-footed boobies, frigate birds and amazing sea life. To top it all, the wildlife of Galapagos Islands is not bothered by human presence for the most part as visitors are not allowed to stay on the preserved islands. This is why the Galapagos is often called “Nature’s Own Laboratory” as species are allowed to evolve in isolation. 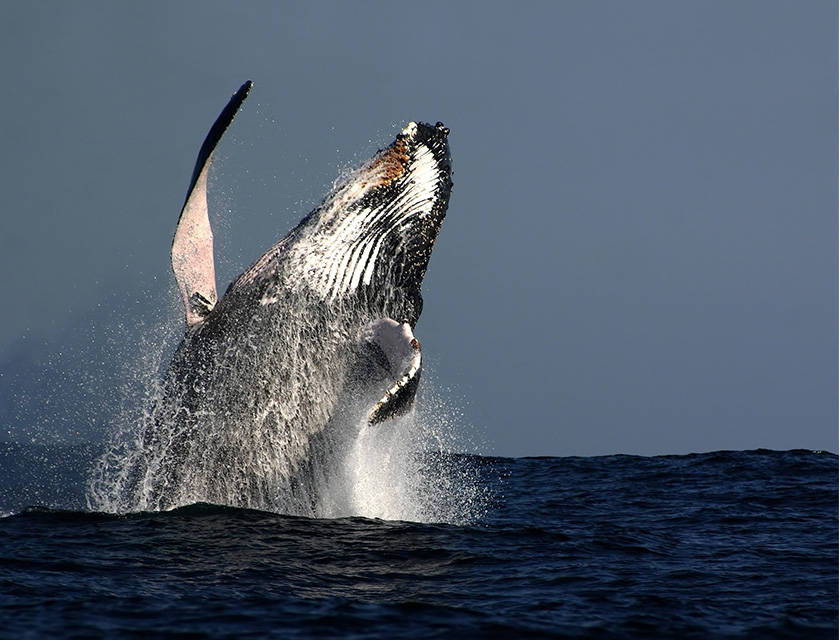 Sri Lanka can put you in a light trance with its beautiful imagery—green pastures, virgin beaches, coconut trees, and calm waters. To top it all, you can add the epic image of massive blue whales breaching in the sea. Located in the International Whale watching Commission’s protected zone in the Indian Ocean, Sri Lanka gives you a great opportunity to witness the largest mammal, the blue whale. Head over to seaside town of Weligama, which hosts one of the highest concentrations of dolphins and whales, for an experience of a lifetime! Nowhere else in the world do these whales come so close to the shore as they do off Sri Lanka’s Southern tip.