The beautiful city of Udaipur, located in the Indian state of Rajasthan, is famous for its Mewar architecture and five major man-made lakes. Two months ago, two friends and I set off to spend 24 hours exploring Udaipur and learned a few lessons about the city of lakes. The four-hour journey from Ahmedabad was surprisingly gorgeous as we were unaware we’d spend most of the time on roads curving across the lush green Aravalli Range.

A view of the Aravalli Range

Lesson One: Do not use a navigation system!
After keying in our hotel’s address, the GPS calculated the shortest route to the destination. It turned out that the shortest route was through the narrowest lanes of the old city, most of which should really just be one-ways owing to how narrow they are! What should’ve taken us fifteen minutes turned into a forty five-minute long harrowing journey. Ankit, who was driving, frustratingly guided the car through the chaos while Veda and I tried to help but mostly got distracted by all the window-shopping opportunities.

Our journey led us to our chosen hotel, Chunda Palace. Located next to the world famous Oberoi Udaivilas Hotel, Chunda Palace is a relatively new boutique hotel. The Mewar-style building hosts a surprisingly large number of rooms yet manages to give you the feel of a small hotel. The walls are adorned by beautiful murals and the rooms are really huge (around 600sq feet).

The lobby at Chunda Palace 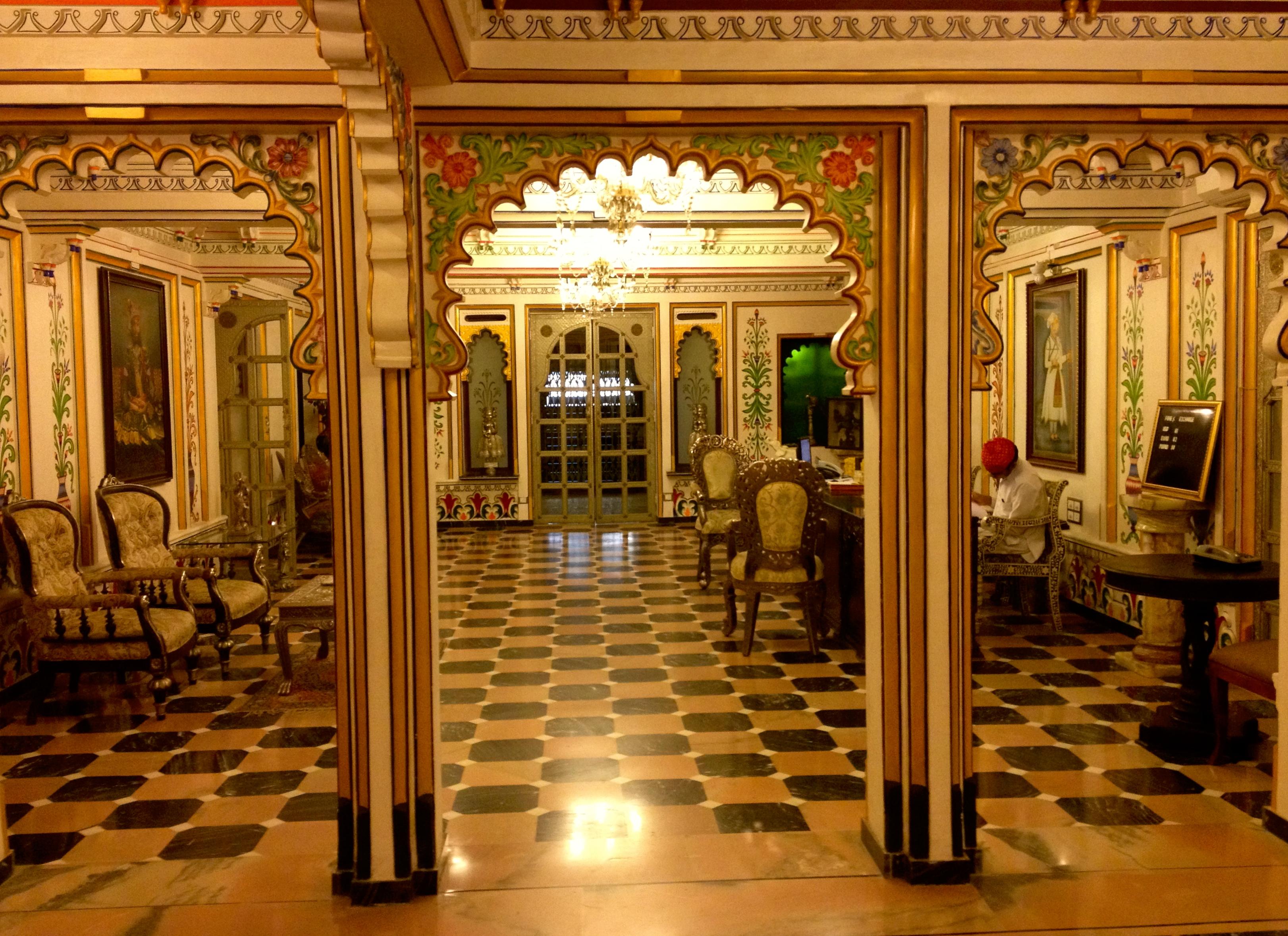 The Reception at Chunda Palace

Lesson two: See beyond Lake Pichola
After a delicious Indian lunch at the hotel’s restaurant, we set off on a lakeside drive. We considered driving to the popular Lake Pichola but were closer to Fateh Sagar so stuck to it instead. The scenery was beautiful and we ended the drive with a calming sunset boat ride across Lake Fateh Sagar. 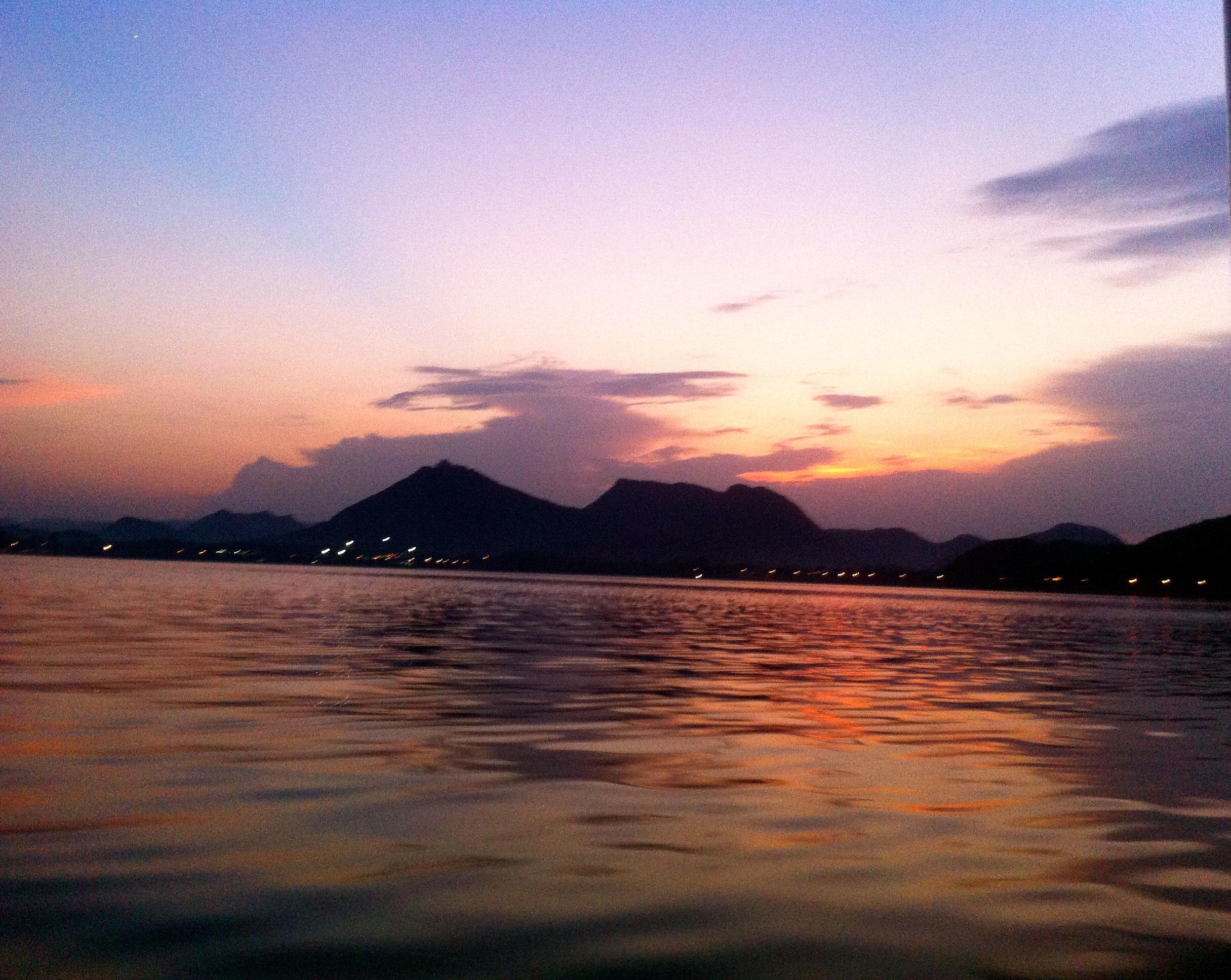 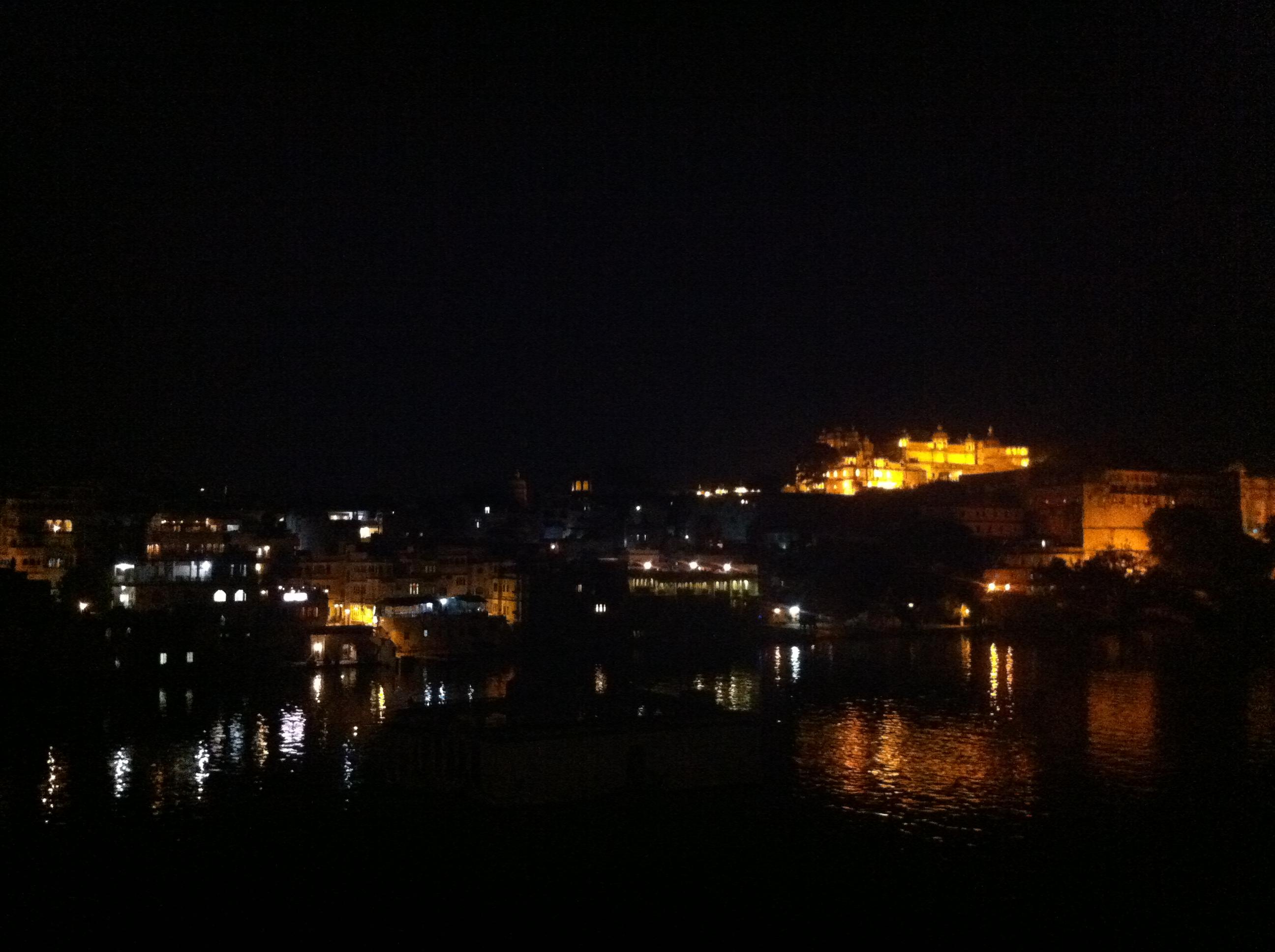 The view across Lake Pichola at night is gorgeous

Lesson four: Leave your car behind
The next day, we set off to explore Udaipur’s crowning glory, the City Palace. However, the lanes leading to the Palace were once again really narrow and parking was an issue. So, when you visit the city, make sure you leave your car behind and take a rickshaw instead.

Lesson five: The City Palace does not disappoint
Having seen many other palaces and forts around Rajasthan, my friends and I weren’t expecting much from the City Palace. I’m glad to say that we were mistaken. The Palace had its own unique charm, offers stunning views across the city, and our jovial guide enhanced the entire experience. Built in 1559AD, and modified a few times later, Udaipur’s City Palace is one of the Mewar’s finest architectural achievements. The four storey high complex has been built with minimum invasion to the hilltop on which it is located, so much so that you can actually find a garden growing out of the hill on the fourth floor! Rather than flattening out the land, the Palace is built around the hilltop. 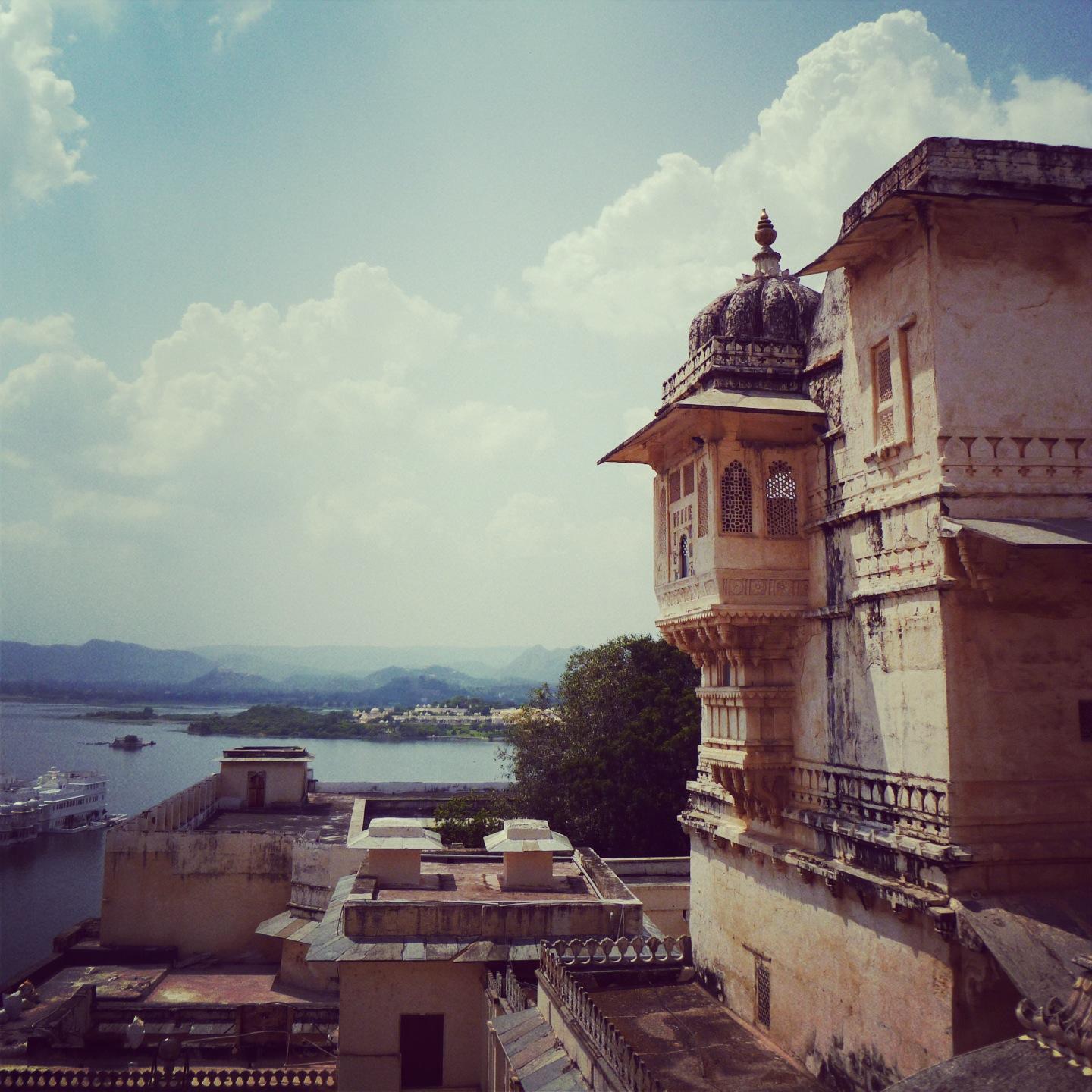 View from the City Palace 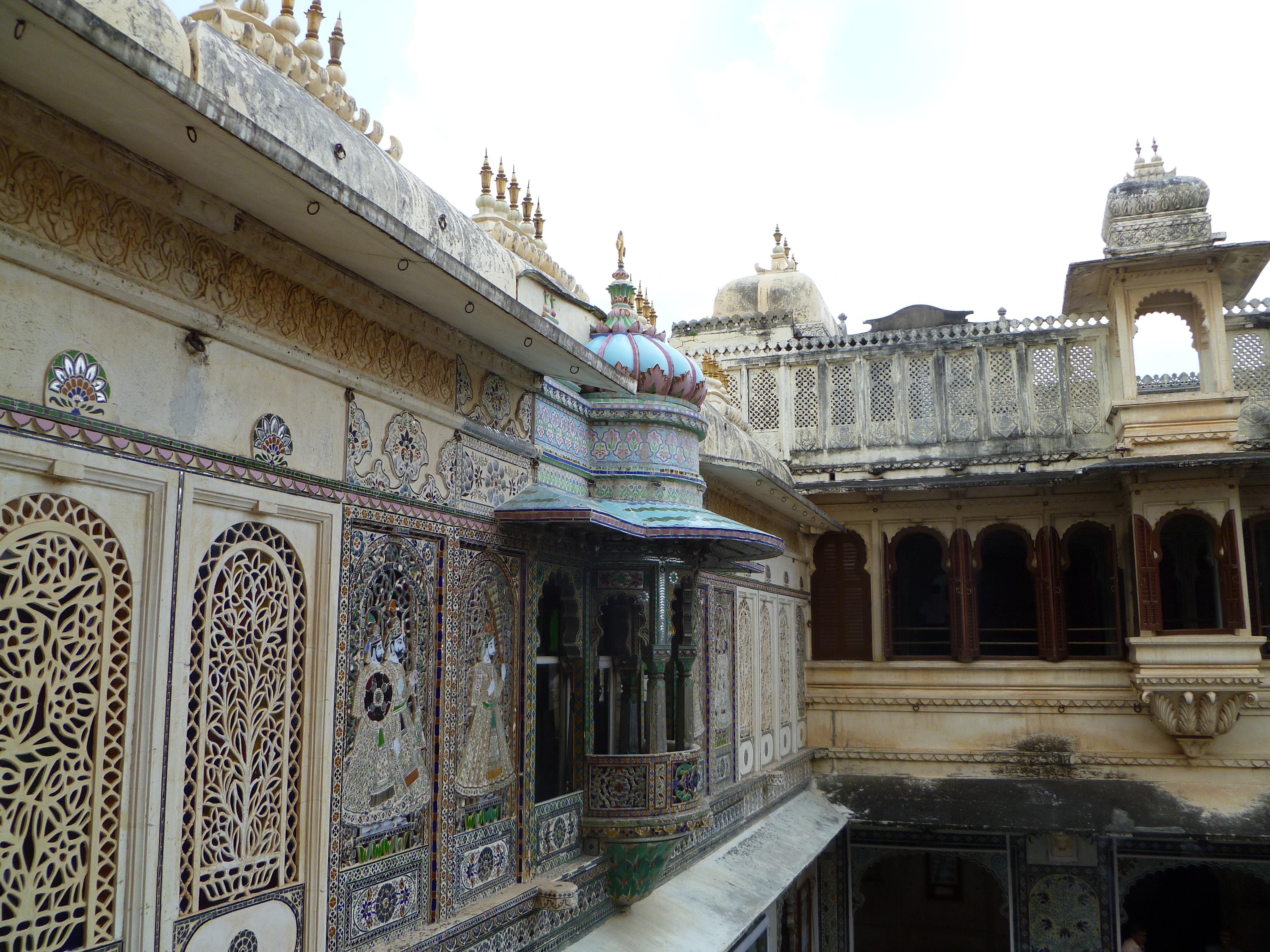 The Palace has intricate designs all over

I’d definitely recommend getting a guide as it’ll help you understand details like why the stairs are uneven, and the doors are low. You’ll also hear interesting historical details like how one of the kings had sixteen wives, one rode a horse disguised as an elephant into battle, and how some kings used “pan” (an Indian after mint) to convey romantic messages to their queens. 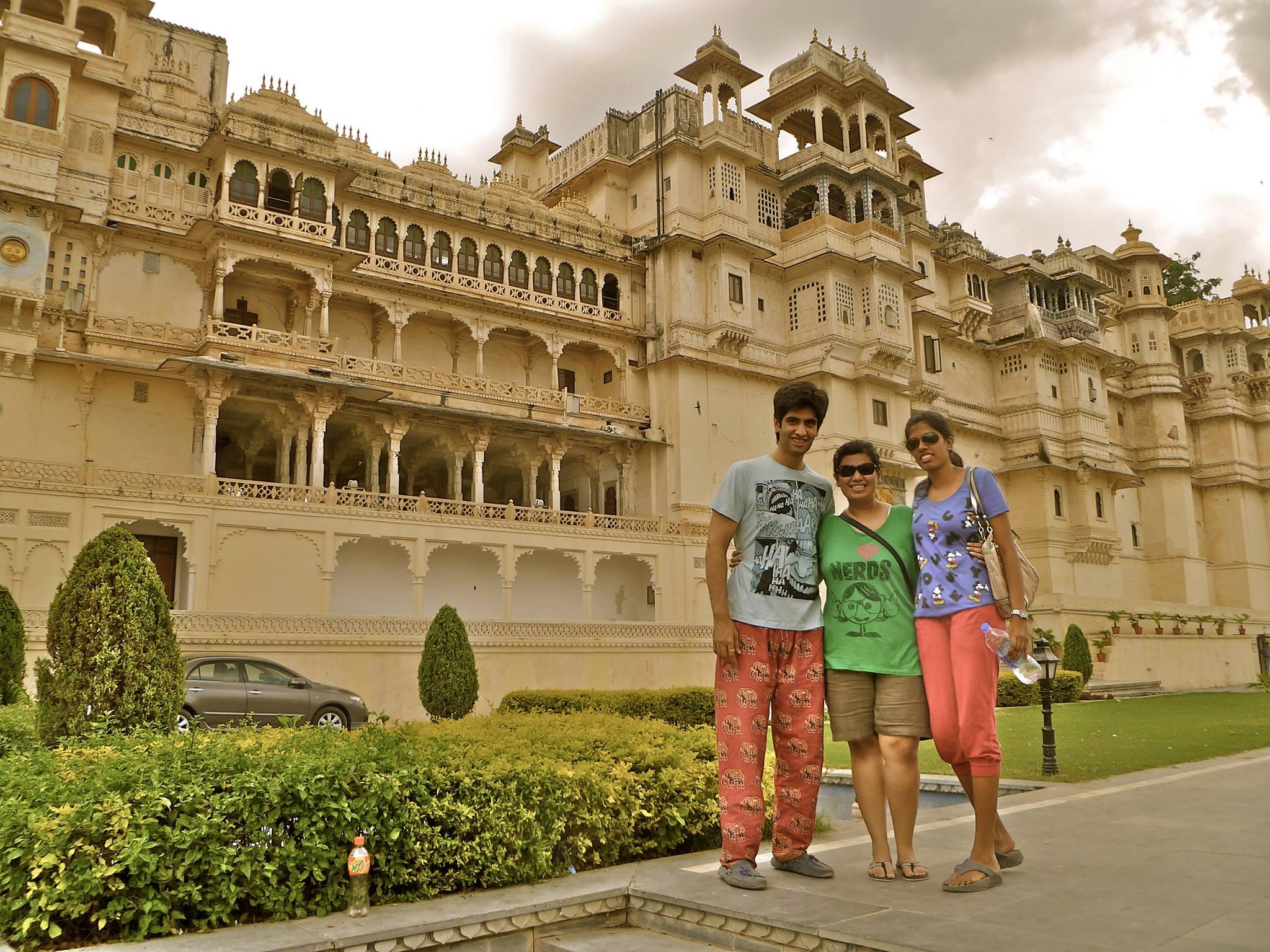 Most important lesson: Udaipur is not overhyped, and worth visiting.
Constantly hearing about Udaipur’s beauty and its many tourism awards might lead you to think that the city is a tourist trap and an overhyped destination. While the former might have a bit of truth to it, the latter is definitely not true. Udaipur deserves the praise and the awards. Besides the City Palace, Lake Pichola, and Lake Faten Sagar you can visit the Saheliyon ki Badi (Garden of the Maids), Doodh Talai (great to catch the sunset), and Nehru Garden (situated in the middle of Lake Fateh Sagar). There is a popular market around the City Palace where you can buy beautiful stoles, paintings, handicrafts, etc. Make sure you bargain aggressively and if you’re looking for a deal make your way down to the Haati Pool market that is less-frequented by tourists and thus offers better prices.

If you’re lucky enough to have the time, I’d recommend spending a few days (rather than just 24 hours) in Udaipur enjoying the hustle bustle of the city and the calming beauty of the lakes.

You can visit Udaipur and other cities in Rajasthan with Planetwildlife and Planettraveller. Contact our travel experts for tailormade tours.