After travelling to the ‘Lake city’ – Udaipur, last year, I couldn’t get Rajasthan out of my mind and eagerly looked forward to exploring more of it. Every place in Rajasthan makes a traveller want to camp for at least three days to explore its forts, palaces, lakes and shopping areas. But if you’ve got a week off from work, and want to taste every bit of the state, the good news is you can do it in a single, exhausting yet delightful journey. I did just that recently on a trip with friends. We travelled from the ‘Golden city’—Jaisalmer, to the ‘Blue city’—Jodhpur and ended our holiday in the ‘Pink City’—Jaipur. 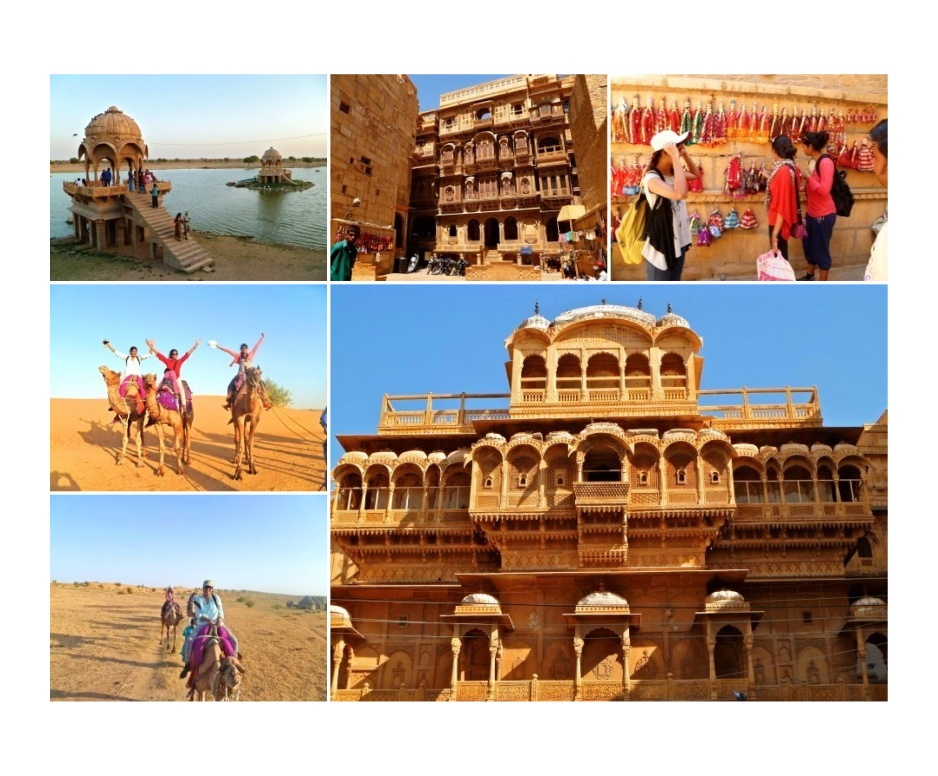 Jaisalmer, named after the Hill Fort of Jaisal, is called the “Golden City of India” because the yellow sand gives it a yellowish-golden shade. Nestled in north India in the Thar Desert of Rajasthan, Jaisalmer is known for its stunning sand dunes, magnificent havelis (mansions) and forts, and ornate Jain temples.

After getting off the 16-hour long Delhi-Jaisalmer Express train we checked in to our hotel, Jasmine Home, a small boutique hotel with five extremely clean rooms and excellent service. Post a quick afternoon siesta, we visited Gadisar Lake, a place where you can sit for hours and watch the sunset. There are many temples and shrines surrounding the lake, which contrary to popular belief, is not an oasis but a water conservation tank made around 1400 A.D. by the then Maharaja of Jaisalmer, Maharwal Gadsi Singh.

Next day, we visited Jaisalmer Fort, called “the living fort” because 25% of the old city’s population lives in its walls. The massive expanse of the fort has shops crammed in a line on the streets selling souvenirs and handicrafts. The architecture of the Fort’s Jain temple is spectacular.

We then walked through narrow streets to Salim Singh ki Haveli and Patwa ki Haveli. Salim Singh ki Haveli is famous for its intricate etched architecture and the engravings on its arched ceilings. At Patwa ki Haveli, the honey-coloured sandstone walls fascinated us and the museum taught us about the haveli’s history. If you have time, also consider visiting Nathmal ki Haveli, a former Prime Minister’s residence, to see the riches of India.

What we experienced next was the most delightful part of our trip. We were driven to the Sam Sand Dunes, 42 kms from Jaisalmer. En route our driver/guide drove past Bada Bagh, (literally meaning “Big Garden”) that holds a set of royal cenotaphs; an oasis, and a ghost town named Kuldhara, one of the 84 towns s that were abruptly abandoned over 175 years ago.

We drove further into the desert to find camels awaiting us on the dunes. The camel ride was the most awesome part of the trip. I felt like a Rajput warrior! Watching the sunset was one of the most gripping moments of the camel ride. The swing of the camel ride, the exotic desert stretch, the cool desert breeze caressing my face and the sand dunes awakened the traveller in me. As dinnertime approached, our driver/guide found a tranquil spot, and prepared a delicious vegetarian meal on campfire. All we did was sit and indulge under the bright stars! 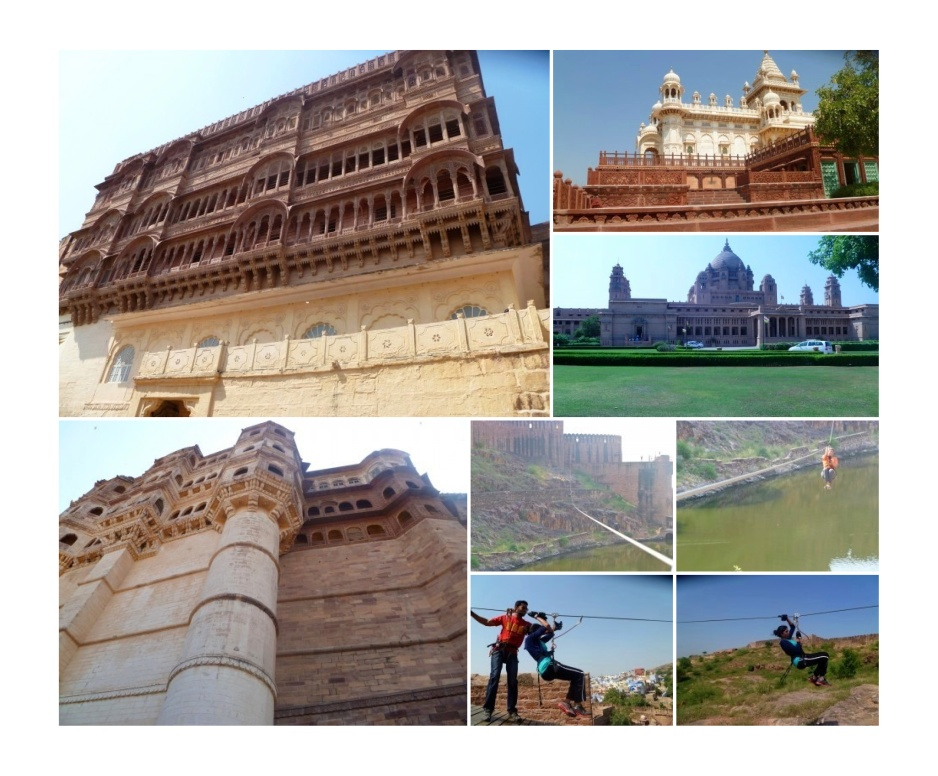 Got off the early morning train and were driven to our Hotel, Ratan Vilas—a heritage property with old world charm. Our plan for the day was to visit Mehrangarh Fort and Jaswant Thada.

As we approached Mehrangarh, which is nestled 400 ft above the blue city, we felt adventurous and were all set for an aerial ‘zip’ tour by Flying Fox, which offers six zips in six spectacular locations across the Fort. We zipped across the skies taking in great views of the city, Ranisar Lake, Rao Jodha Park, and of the Fort itself. The final zip route was possibly the most iconic, flying over not one but two lakes and landing on the tip of a fortified tower rearing 30 mts out of Ranisar Lake.

After two hours of adrenaline rush, we explored the rest of the fort to take in the grand 15th century architecture. Mehragarh Fort is one of the most beautiful and largest forts I have ever seen. Part of it has been turned into a museum. I would recommend taking a combined guided tour of Mehrangarh and Jaswant Thada to get the best out of your trip. Jaswant Thada, adjacent to the fort, is a 19th century royal cenotaph built in remembrance of Maharaja Jaswant Singh II, the 33rd Rathore ruler of Jodhpur.

Next day, we visited the Umaid Bhavan Palace, most of which has been converted into a mega star hotel and is off reach unless you are staying there. The well-manicured lawns and magnificent Palace structure make for a great view! It houses a collection of art, time pieces, artillery, paintings, and glassware from across the globe—giving a perspective of the great lives of the Jodhpur Royal family and their interest in art.

Later during the day, we went to the Clock Tower Market, busy and chaotic but at the same time colourful. It doesn’t really have the charm of the old blue city, but it's a good place to spend a couple of hours strolling. There are lot of places to shop and eat here. Do try the famous Mawa Kachori in Janta Sweets.

Read Part 2 of the story here.