During my March vacation, my parents and I went to Tadoba National park in search of tigers. I had seen lions, leopards and even a caracal in the wild, but never a tiger. Tadoba is two-and-a-half hours away from Nagpur. We stayed in a wonderful resort named Irai.

We went for two afternoon safaris and two morning safaris. To enter the forest there are 6 gates, of which we took 2 gates. There were different jeeps for each gate which had a sticker that showed the name of the gate. One is the Moharli gate which is the biggest gate and the second is Kutwanda gate. The Kutwanda gate took us to the territory of a tigress named Maya and the Moharli gate entered the territory of a tigress named Sonam. Our guide told us that Sonam’s father’s name is Wagdo and mothers name is Madhuri. She has 3 sisters named Gita, Lara and Mona. Wagdo’s fathers name is Yeda-anna and Wagdo is the largest tiger in Asia. We also got to know that Madhuri and Wagdo are kept in the buffer zone, because they are too old to survive in the main forest. 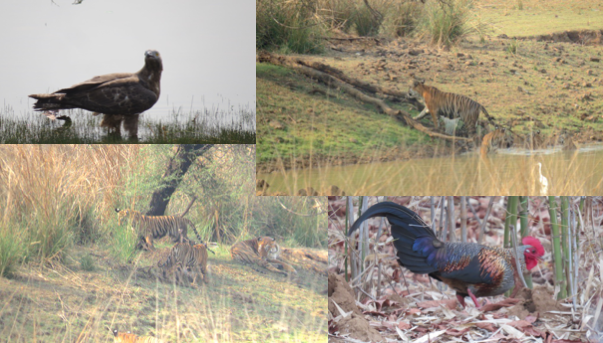 Our first two safaris were from the Kutwanda gate and the other two were from Moharli gate. To reach the Kutwanda gate, we were to be picked up in a jeep. After reaching the gate we had to fill in some forms, after which we wer allowed to enter the forest. In the first safari we saw a tigress named Maya and her cubs at a distance, langurs, chitals, a grey mongoose, a beautiful fish eagle, cormorants, the colourful Indian roller, a kingfisher and even a sleepy, camouflaged owl.

In the second safari we saw a male tiger named Gabbar passing right ahead our car and we were lucky that we were the only car there. Gabbar had hurt his leg and was limping, felt like he had a fight. We spotted Maya and her two cubs. After some time Maya came out and sat down with her back facing to us. Later, we spotted a wild fowl, a serpent eagle, a fish eagle, grey mongoose and sambar. On every safari, I saw number of spotted deers. 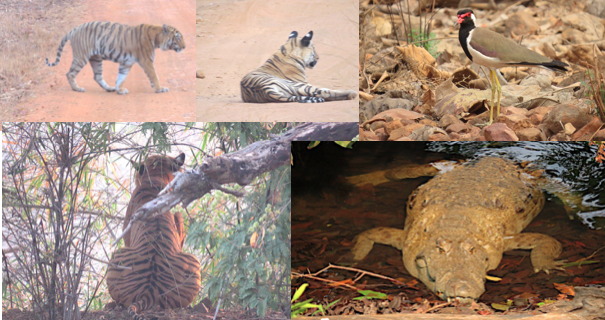 My third safari was from the Moharli gate. As we entered we went in search of the tigress named Sonam. First, we drove towards the lake and waited there for a long time but wasn't lucky enough to spot Sonam. Then we went in search of birds - spotted birds such as the sun bird, peacock, peahen, hawk-eagle, fish eagle, jungle fowl and the Magpie. We also sighted the Gaur (The Indian Bison)

On the last day we went in search of Sonam again. We waited at the same place and we drove around three times around the same place. As we were about to leave we heard a roar so we went back a little in search of Sonam. When we reached there we saw Sonam and her cubs walking towards the water. Sonam sat in the water and called her cubs to join her. After drinking water they started cuddling. We were extremely lucky to have spotted Sonam and her cubs when we just had five minutes in the forest. 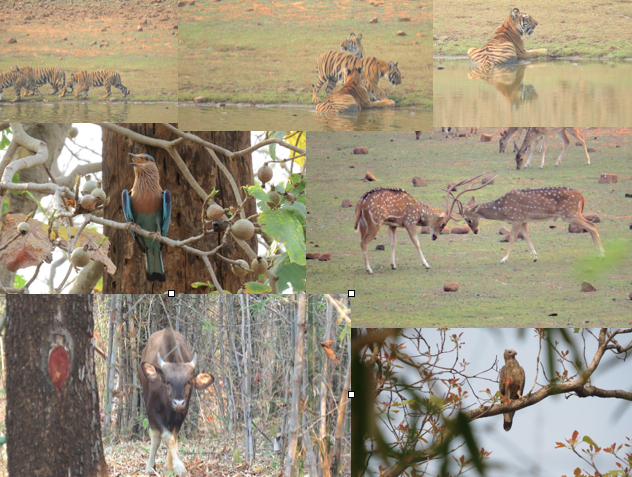 I was sad that we had to leave without seeing the Sloth Bear. At the same time I was so happy to have spotted tigers, for the first time, in the wild!

For a Tiger Safari Holiday, contact our travel specialists at : travel@planetwildlife.com